Lena Hall Announces Release of ‘From West Africa To Washington’

New historic novel takes readers through 300 years of American history to show how it has become the country it is today. 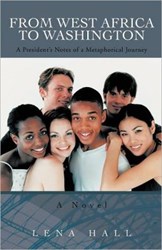 Inspired by her fascination with American politics, history and her interest in the election of a black president, author Lena Hall penned “From West Africa To Washington: A President’s Notes of a Metaphorical Journey” (published by iUniverse), a fictitious tale of one black man’s fight acquire the top position in American politics – the presidency.

Readers find themselves in Africa, where they watch a young black man, Kwame, being sold into slavery. This changes his destiny forever as he finds himself in America during the emancipation of the slaves. Three hundred years later, Kwame, his sister and two of his friends find themselves in the present day. Even more surprisingly, Kwame has become the president of the United States.

Filled with friendships, loyalties and infidelities, “From West Africa To Washington” follows Kwame and his friends as they live through their collective history and discover that within this journey lives the history of an entire nation.

An excerpt from the book:

“Although Bashir was converted to Catholicism, he still had inclinations toward his Spiritism background. It was somewhat amusing to see him making the sign of the cross on his chest as he recounted the dreadful demise of the orphanage and the Nuns inside. In the same breadth he tried to convince me that the Spirit was with him and it caused him to leave the orphanage at the time he did so that he could escape the fire.”

About the Author
Lena Hall is an associate professor at Nova Southeastern University; she teaches classes in social psychology and discrimination. She earned two master’s degrees from Columbia University and a doctorate from the University of Florida, all in counseling psychology. She has written numerous academic articles, as well as a textbook on multicultural psychology.