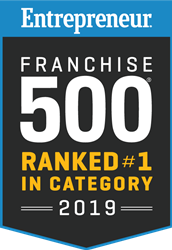 "Lendio franchise owners are invested in their communities; they understand the economic impact and job growth made possible through access to capital for entrepreneurs."

Lendio Franchising recently ranked in Entrepreneur magazine’s Franchise 500®, the world’s first, best and most comprehensive franchise ranking. Named #1 in the Business Financial Services category for the second year running, Lendio Franchising was recognized for its outstanding performance in areas including unit growth, financial strength and stability, and brand power. Placement in the Franchise 500® is a highly sought-after honor in the franchise industry; Entrepreneur received more than 1,000 applications this year, making it one of the company’s most competitive rankings ever.

“Lendio franchise owners are invested in their communities; they understand the economic impact and job growth made possible through access to capital for entrepreneurs,” says Mark Cottle, Executive Vice President of Franchising, Lendio. “Through personalized consultations and streamlined access to the nation’s best commercial lenders, these franchisees are filling a critical financing gap for hundreds of small business owners.”

“Lendio provides many ways to market and grow my business, from hosting pitching events to forming referral partnerships with local banks,” says Jason Kirkham, owner of Lendio Utah. “As a business owner myself, I understand the financial challenges of businesses in my community and the need for expanding access to business financing.”

Key factors that go into Entrepreneur’s Franchise 500® evaluation include costs and fees, size and growth, support, brand strength, and financial strength and stability. Each franchise is given a cumulative score based on an analysis of more than 150 data points, and the 500 franchises with the highest cumulative scores become the Franchise 500® in ranking order.

“As we celebrate 40 years of producing the Franchise 500, it’s a good opportunity to step back and look at how much has changed since that first ranking in 1980,” says Jason Feifer, editor in chief of Entrepreneur. “While the franchise business model has changed little, the strongest franchise brands are constantly evolving and innovating to keep up with changing trends and technology.”