Leo Papadopulos’s newly released “Lesser-Known Saints of the Early Church: Volume 1” is a profound text that brings light to the saints whose names are less celebrated

“Lesser-Known Saints of the Early Church: Volume 1” from Christian Faith Publishing author Leo Papadopulos reveals equally significant saints whose names are not known to everyone but shared the same spiritual goals as more prominent ones. 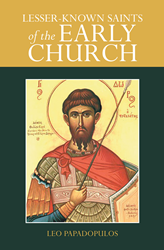 An excerpt from the book relays, “The great saints of the Church are known to everyone. They are known to people, and they are known to God. The lesser-known saints are not known to everyone. They are known to God but not to people. But they, too, were saints in their own right. They, too, struggled for the same goals as did the great ones.
“In this collection, Leo Papadopulos tries to bring to light some of the lives of those men of God who struggled unbeknownst to anyone and passed by unnoticed by the ‘eyes of the beholders.’ Therefore, those of us who honor and observe them must bear in mind that if we honor the saints, we honor God, and this falls in line with the old proverb which states, ‘Praise God in his saints.’ They, too, labored for the same goal as did the greater ones and helped to perpetuate the life of the church throughout history. Many of them became martyrs; many more became confessors. Many suffered for the Faith. And through all their efforts, they bolstered the institution of Christianity, which is the kingdom of God on earth and which proclaims, ‘By his saints, God has performed wonders on earth.’ Amen.”

Published by Christian Faith Publishing, Leo Papadopulos’s new book is a brilliant way to share the lesser-known saints of the church and the examples they displayed that will bring inspiration to everyone.

For additional information or inquiries about “Lesser-Known Saints of the Early Church: Volume 1,” contact the Christian Faith Publishing media department at 866-554-0919.