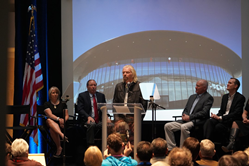 “Let the future begin!” said Sir Richard Branson this morning as he announced that Virgin Galactic would be moving its California operations to Spaceport America near Las Cruces over the coming summer, in preparation for initiating the world’s first commercial space flights.

Many an exciting announcement has been made by Spaceport America’s anchor tenant Virgin Galactic in recent months, but joined by New Mexico Governor Michelle Lujan Grisham at this morning’s press conference in Santa Fe, Virgin Galactic founder Sir Richard Branson announced that in preparation for they will move 100 staff and their families, and Spaceship VSS Unity to Spaceport America.

Virgin Galactic will reposition its space system consisting of carrier aircraft VMS Eve and spaceship VSS Unity from Mojave California to Spaceport America over the summer months once cabin interior and other work has been completed by Virgin Galactic’s sister manufacturing organization, The Spaceship Company. It will complete its final test flights from New Mexico for commencing a full commercial service for passengers and research payload. TSC will remain based in Mojave where it will continue building Virgin Galactic’s planned fleet of SpaceShipTwo and (carrier aircraft) WhiteKnightTwo vehicles.

Two successful suborbital test flights have been conducted by Virgin Galactic’s VSS Unity, the latest of which on February 22 carried astronaut trainer Beth Moses as a crew member and test passenger, and exceeded three times the speed of sound on its journey.

Future Virgin Galactic paying passengers will be headquartered in Las Cruces as well, as they train during their four-day experience, which will culminate in their own adventure to the edge of space. More than 600 enthusiastic civilian astronauts have paid the $250,000 price tag, Virgin Galactic has said, and their adventures into space will include a brief period of weightlessness and the dramatic opportunity to see the earth’s curvature from space.

Public tours of Spaceport America already depart from Visit Las Cruces offices, and as Virgin Galactic and other Spaceport America tenants gear up their operations, Las Cruces’ economy will experience increased tourism, as well as impacts on local businesses from staff who will be located in the community for short- and long-term stays.

Nestled in southern New Mexico’s Mesilla Valley between the Rio Grande River and Organ Mountains, Las Cruces also has close connections to space tourism as the gateway to New Mexico and the United States’ first commercial spaceport, Spaceport America; an Annual Space Festival; and a full-size replica of Virgin Galactic SpaceShipTwo. Las Cruces partners with several aerospace companies including Virgin Galactic, Boeing, and NASA. The city boasts a rich history of western legends such as Billy the Kid and Pat Garrett and blends a unique variety of such special events, attractions, culture and historical sites, as well as superb weather, with 320 days of sunshine per year. Las Cruces was recently cited as one of the most scenic Southwest cities by Expedia users, Money Magazine named Las Cruces number 3 on their list of 20 Best Places to Visit in 2019 and the annual Las Cruces Country Music Festival has been nominated as ‘Event of the Year’ by the Rocky Mountain Country Music Awards. For more information on all Las Cruces has to offer, go to http://www.visitlascruces.com or contact Visit Las Cruces at (575) 541-2444.