Liam Edward’s book “A Marriage to An Asexual Bisexual: A Book Of Poems” shares a journey of confusion, resentment, anger, and concerns over a period of about thirty days.

Recent release “A Marriage to An Asexual Bisexual: A Book Of Poems” from Page Publishing author Liam Edward is a collection of poems presented in chronological order as they were written over those thirty days. It’s a journey that has allowed Liam to process everything that has happened and everything that was presently going on in his life. 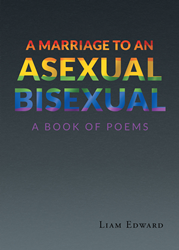 Liam Edward, who grew up in the suburbs of Philadelphia, Pennsylvania, has completed his new book “A Marriage to An Asexual Bisexual: A Book Of Poems”: a book of poems that takes readers on a journey through the author’s mind as he processes the broken marriage with his wife who was the love of his life.

Liam’s wife came out as asexual and bisexual, which confused Liam as to what his role was in the relationship. When Liam’s wife came out, they were already separated for about nine months. Liam’s wife asked him to move back in and work on the marriage. There were some hurdles to overcome, though.

When his wife came out as asexual and bisexual, his wife also told him that she was sexually roleplaying on Twitter using characters from Lin-Manuel Miranda’s Broadway plays and movies. Liam told his wife that he was willing to work with her coming out as asexual and bisexual because he loved his wife very much but was not willing to accept her sexual roleplaying while being married. His wife agreed to stop the sexual roleplay, so Liam moved back in to work on the marriage. A few months later while cuddling in bed at night, Liam saw his wife sexually roleplaying on Twitter and told his wife the next morning that she was cheating on him. Things went south really fast.

After Liam confronted his wife about the cheating, his wife kicked him out of the house. Liam spent that weekend scared, confused, and confiding in the bottle. Liam relapsed after being sober for some time. Liam went into rehab where he met with his therapist every week. His therapist challenged Liam to journal every day to get his thoughts and emotions out so that he could process them. The journaling led to writing poems.

Author Liam Edward is an avid sports fan of the local sports teams. Liam is the youngest of five siblings and grew up in a great household. Liam graduated college from a small liberal arts college in North Carolina in 1998. Liam has spent most of his professional career in restaurant management. In 2007, Liam met the woman of his dreams and was married to her in June 2008. Liam and his wife grew their family via the foster-to-adopt program. They have three kids together.

Liam started writing poems in the fall of 2021 after going through a lot of personal and relationship issues. Writing poems was very therapeutic for Liam to get his thoughts and emotions out and to deal with them healthily. Liam is a recovering alcoholic and a friend of Bill. In his spare time, Liam likes to hang out with his kids, goes to sporting events, and loves going to the movies. Liam also takes time each day to work on his poems and other artistic avenues.

Published by Page Publishing, Liam Edward’s remarkable work invites readers inside the mind of the author as he processes this life-changing experience.

Readers who wish to experience this thoughtful work can purchase “A Marriage to An Asexual Bisexual: A Book Of Poems” at bookstores everywhere, or online at the Apple iTunes Store, Amazon, Google Play, or Barnes and Noble.