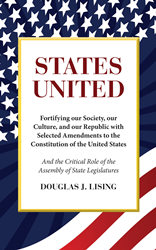 We are all concerned about the direction of our government. Progressive politicians want huge and often radical changes while the old guard is slow to address problems.

States United discusses issues such as ineffective fed programs, term limits, balanced budget, and others which may be resolved through Constitutional amendments. It introduces the Assoc of State Legislatures which is considering an Amendatory Convention.

This book will be of significant interest to those concerned with securing our freedoms and a smaller, more efficient government. Readers will be encouraged to consider and debate these important issues and potential solutions.

“We are all concerned about the direction of our government. Progressive politicians want huge and often radical changes while the old guard is slow to address problems. Many on both sides are talking about Constitutional amendments,” said Lising.

Douglas Lising is the retired CEO and founder of Remtech Services, Inc., an award-winning computer services firm. Doug is also a retired U.S. Army Lieutenant colonel and Vietnam veteran, and he holds a master’s degree in business administration from Boston University. His previous book, Remember Roscoe Filburn, a discussion of the commerce clause of the U.S. Constitution, was called “a serious work of legal and political importance… [that] fills a vital need in educating the average citizen on an extremely important subject” (Steven D. Laib, the Intellectual Conservative). It has also been quoted and referenced in the Encyclopedia of Constitutional Amendments by John R. Vile.