LTC Presents Camp Administrator With Strategies for a Lice-Free Summer 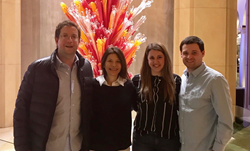 LTC staff will be at the 2019 ACA Tri- State Camp Conference in Atlantic City March 12-14.

“We are proud that camps that participate in our Lice Insurance™ Programs are successful in controlling the spread of head lice among campers and staff...."

The staff at the LTC® booth at the ACA Tri-State Camp Conference in Atlantic City are all experienced leaders of LTC’s Camp Lice Insurance™ Program. They lead teams of professional lice technicians to camps throughout the Eastern U.S.(from Maine and the Berkshires to New York and West Virginia) conducting head checks and treating any cases of head lice they uncover. Adrian Picheny, Director of Camp programs, said, “It’s interesting to note that head lice outbreaks are more common at camps whose campers have come from long distances on public transportation or had close contact with crowds of people from all over the world.”

The LTC staff will offer examples of how the many tri-state camps they serve now mitigate serious lice outbreaks by contracting with LTC’s professional technicians to conduct head lice checks periodically throughout the camp season. According to Ms Solovay, “We have found the best prevention strategy involves continual vigilance. That is, conducting periodic checks of campers and staff on opening day, at mid- summer and just prior to the end of camp sessions. Camps with multiple sessions generally schedule head checks to coincide with the beginning, middle and end of each session. The important thing is to screen campers carefully and often so that one case of head lice doesn’t spread, creating a major infestation throughout the whole camp.”

“The old saying that ‘an ounce of prevention is worth a pound of cure’ is really true when it comes to head lice,” said Mr. Picheny. “We are proud that camps that participate in our Lice Insurance™ Programs are successful in controlling the spread of head lice among campers and staff who have either been checked and cleared or checked and treated by our professional technicians.”