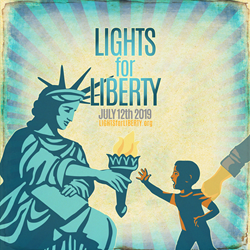 "It is heartening that so many cities, countries and people are taking part in Lights for Liberty to show that they care and are ready to stand up to hatred,” said Ravi Raghbir, undocumented person and Executive Director of New Sanctuary Coalition.

Lights for Liberty: A Nationwide Vigil to End Human Detention Camps is proud to announce that it now has events scheduled on five continents and in nearly 600 locations worldwide for this Friday night from 7 pm to 9 pm local time.

Beginning at 7 p.m. on July 12th, advocates, activists and impacted persons will speak on the issue of human detention camps in the United States. At 9 p.m., around the country and around the world, participants will light candles in a silent vigil for all those held in US detention camps to bring light to the darkness of the Trump administration’s horrific policies.

Randi Weingarten, President of American Federation of Teachers, said: “We are teachers, nurses and others who work to help others every day. What the United States is doing at our southern border in these detention camps is an abomination to the soul of our country and is contrary to everything we do. In the aftermath of World War II, ‘never again’ was meant to mean never again. America led the world in the fight against human rights abuses. Now, these abuses are perpetrated by our own president on the southern border. Silence is not an option.”

Weingarten continued: “The Lights for Liberty vigil is showing it's possible to resist the administration’s human rights abuses and point a path forward to a brighter, more just, future that honors the values that this country and the international community were founded on.”

“Every day, my loved ones, my family, my friends and I live in fear of my imminent deportation. Millions of immigrants live under this terror because of the hatred and racism of this administration. These policies are designed to target people of color and to ensure they are deported. It is heartening that so many cities, countries and people are taking part in Lights for Liberty to show that they care and are ready to stand up to hatred,” said Ravi Raghbir, undocumented person and Executive Director of New Sanctuary Coalition.

“Lights for Liberty is a chance for the world to show this administration that it will not tolerate these atrocities for a moment longer. I am proud to stand with so many impacted individuals and advocacy organizations as this movement fights back,” said Rosie O’Donnell.

“Lights for Liberty began with a series of tweets I drafted, in which I shared the horrors that one of our co-founders, attorney Toby Gialluca, had seen inside the camps,” said Elizabeth Cronise McLaughlin, co-founder of Lights for Liberty. “Since then, we’ve watched thousands of ordinary people come together to organize events and fight back worldwide.”

“One month and one day later, millions around the world will stand in vigil and in outrage against this administration’s heartless policies and crimes against humanity,” McLaughlin continued. “We intend to be here for as long as it takes, until every last detainee, in every last camp, is free.”

About Lights for Liberty: Lights for Liberty was created by a loose coalition of grassroots activists, with support from long-standing immigrants’ rights organizations and other organizers. More information can be found at http://www.lightsforliberty.org.