Lily Allen announced earlier this week that she will be embarking on an extensive 2014 world tour in support of her recent album, Sheezus. Tickets go on sale to the general public Friday, May 16th, and are available at a discounted rate at SuperStarTickets now. 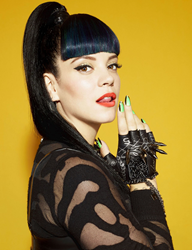 British singer, Lily Allen has just announced that she will be embarking on a massive world tour this summer and fall. She will begin the North American leg of her tour on September 9th and make 19 stops across the United States and Canada before finishing up in the United States on October 10th in Los Angeles. This will mark the first tour that Lily Allen has done in North American in the past four years.

Lily Allen quickly rose to fame in 2005 when she made public recordings of her music on Myspace resulted in a record deal. In 2006, she release her first single, "Smile," which rocketed her career into the mainstream media. She hasn't slowed down since then, recording three studio albums and launching her own record label.

Allen released her third studio album, Sheezus, earlier this month; the name of the album was a nod to Kanye West's recent album Yeezus. The album contains the singles "Hard Out Here," "Air Balloon," "Our Time" and "Sheezus." After releasing the album, Lily Allen announced that she is already halfway through the production of her fourth album, however it may be her last, making this 2014 tour even more important.

2014 Lily Allen tour tickets go on sale to the general public this Friday, May 16th, and 10am. Given her popularity and this being her first North American tour in four years, Lily Allen tickets are expected to sell fast. SuperStarTickets is offering a 10% discount to fans looking to secure their tickets now. Just enter the code SHEEZUS at checkout; act fast, this offer is only valid for a limited time.

SuperStarTickets is the nation's premiere ticketing source for concerts, theatre and sporting events. We pride ourselves in not only our incredible tickets, but also in our commitment to our customers. With highly skilled representatives there to guide you along the way, we guarantee that your ticket buying experience will be easy and painless. For more information regarding the Lily Allen 2014 Tour or to find sold-out concert tickets go to SuperStarTickets.com now.