This year marks Linc Housing's 35th year creating affordable housing for communities throughout California. Since its founding in 1984, the nonprofit organization has helped develop more than 8,000 affordable homes in 79 communities. Linc is using this milestone as an opportunity to introduce an all-new logo and brand. 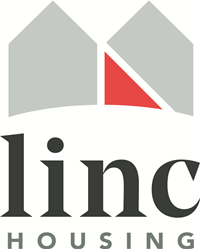 For three and a half decades, Linc has worked hard to create homes for thousands of residents, adding supportive services that increase housing stability, improve health outcomes, and promote well-being.

This year marks Linc Housing's 35th year creating affordable housing for communities throughout California. Since its founding in 1984, the nonprofit organization has helped develop more than 8,000 affordable homes in 79 communities. Linc's future is bright with more than 1,500 more units in the pipeline, many for special needs populations including individuals and families that have experienced homelessness.

Linc is using this milestone as an opportunity to introduce an all-new logo and brand. The new look was unveiled on July 24 at Linc's anniversary celebration, "A Record Night," held at The GRAMMY Museum ® L.A. LIVE. More than 250 colleagues, partners and friends joined Linc staff and board members to honor the organization's work. The updated logo comes with a new tagline, "the Linc between hope and home." The new look will be rolled out to the website and collateral materials through the remainder of 2019.

"For three and a half decades, Linc has worked hard to create homes for thousands of residents, adding supportive services that increase housing stability, improve health outcomes, and promote well-being," said Rebecca Clark, president and CEO, Linc Housing. "What started in 1984 as a small group of concerned leaders has evolved into a vibrant organization of more than 60 team members and countless friends and partners. Through the years, our mission has remained the same — to serve those underserved by the marketplace."

When the organization first launched, it partnered with other developers to create housing, mainly for seniors on fixed incomes. In 1988, Linc began to acquire properties, and then in 1989, the nonprofit broke ground on the first developments. After focusing on senior housing for many years, Linc soon expanded its work to serve low-income, working families. In 2004, the Linc Cares resident services program launched to provide support for those living at Linc's properties. After-school programs, financial literacy and job readiness workshops, exercise classes, and social activities are now a regular part of life for Linc residents.

As environmental concerns became part of the housing conversation, Linc became a leader in sustainability. Linc has long been on the forefront of using environmentally sustainable methods to build and rehabilitate affordable housing communities, such as having new communities be LEED certifiable and retrofitting the portfolio to maximize energy and water efficiency. Linc has also participated in multiple state energy pilots.

In 2011, Linc's efforts pivoted to include housing and services for special needs populations when SEASONS at Compton opened. The new model provided housing for low-income and fixed-income seniors, including seniors with developmental and physical disabilities and those who have experienced homelessness. Soon, The Palace in Long Beach and Mosaic Gardens at Huntington Park joined the portfolio, adding homes for transition-age youth who had aged out of the foster care system.

With the rise in homelessness in Southern California, Linc has expanded its work to include individuals and families who have experienced homelessness. Serving this segment required Linc to find new sources of funding and new partners to help provide the supportive services to ensure residents are successful and stable in their new homes. To date, Linc has finished 227 apartments for the formerly homeless with 388 more in the pipeline.

"It's incredible to see the progress Linc has made in recent years," said Suny Lay Chang, Linc chief operating officer. "Our pipeline has doubled in the last three years, and this trajectory will continue. Also, we believe affordable housing is a platform for deeper community development, including workforce development, education, youth development, health resources, and much more. We're working to expand the impact of housing, services, and community development efforts for the residents and neighborhoods Linc serves."

With this growing commitment to deeper community development, Linc has added community-serving businesses and services to the ground floor of its communities, as with Spark at Midtown in Long Beach due to open in 2020. Linc is also developing housing with similar resources in Inglewood, San Pedro, Willowbrook, and Los Angeles’ Historic Filipinotown.

"It's been a great first 35 years, and we look forward to many more decades of addressing housing needs throughout California," said Clark. "We know one key solution to homelessness is housing, and we're committed to working with our partners to preserve the affordable housing we have and to build more to meet the needs of our communities."

About Linc Housing Corporation
Linc Housing, one of California's most productive nonprofit developers of affordable housing, is committed to building communities and strengthening neighborhoods for people underserved by the marketplace. Linc has helped create more than 8,000 homes in 79 communities throughout the state. The organization's properties are known for excellent design, outstanding management and life-enhancing services for its residents. Linc has 35 years of service to families, seniors, people with special needs, and local governments - helping to create sustainable communities via new construction, acquisition and rehabilitation, and historic preservation. Visit http://www.Linchousing.org for more information.