Lindal Cedar Homes worked with the Frank Lloyd Wright Foundation to design a Usonian-Inspired Home, the Madison, for clients to build on their property. The home is a translation of Wright's first Usonian home design, the Katherine and Herbert Jacobs house, which was recently named to UNESCO's list of World Heritage Sites for its seminal impact on modern residential architecture in the United States. Is it among those previewed in a webinar this Wednesday, presented by Lindal Imagine Series architectural home designers Aris Georges and Trina Lindal. 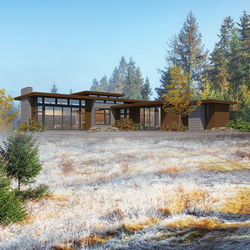 Jacobs 1 - the first Usonian home designed by Wright, is among the eight Frank Lloyd Wright sites recently named to UNESCO's World Heritage List for the United States. The Lindal Imagine Series' Madison home - shown in Wednesday's webinar - is an updated translation of Jacobs 1.

Lindal Cedar Homes — the world's largest manufacturer of custom post and-beam homes — hosts a webinar this Wednesday, July 17, at 5 p.m. Pacific Time. The webinar, titled "Introducing the Lindal Imagine Series," is presented by architect-trained home design professionals and Frank Lloyd Wright School of Architecture graduates Aris Georges and Trina Lindal. In the webinar, Georges and Trina Lindal preview the homes in the series, which they designed, and explain how clients interested in building an Imagine Series home on their property can connect with one of Lindal’s international network of independent representatives to guide them through the process and ensure that their new home integrates seamlessly with the client’s build site and lifestyle needs.

Lindal was thrilled to hear that Jacobs 1 - the first Usonian home designed by Wright and built in 1937, is among the eight Frank Lloyd Wright sites recently awarded the first-ever modern architecture designation on UNESCO's World Heritage list for the United States. The Lindal Imagine Series' Madison home is a translation of Jacobs 1. Although it has been modernized and updated, the Madison closely follows the design and floor plan of the original. Wright (1867-1959), the preeminent modern architect of the 20th century, created organic homes that integrate with their natural surroundings and embraced the use of prefab materials.

In 2018, Lindal Cedar Homes partnered with the Frank Lloyd Wright Foundation to develop the Lindal Imagine Series, a new line of modern homes inspired by the work of architect Frank Lloyd Wright. The effort unites the enduring design principles of Wright’s Usonian homes with current developments in technology, construction and design theory. There are seven designs for modern living enthusiasts to choose from. This is the first time ever that a home company was licensed to produce Frank Lloyd Wright-inspired, Usonian-based home designs. The venture is also a partnership with the School of Architecture at Taliesin, which has its roots in the Taliesin Fellowship, an apprentice program initiated by Frank Lloyd Wright in the 1930s.

About Lindal Cedar Homes
Lindal Cedar Homes, founded in 1945, is the world’s largest designer and manufacturer of custom post-and-beam homes, delivered internationally in the form of an exterior materials package for clients to build on their property. The third-generation family-owned company offers thousands of floor plans and home styles that can be modified to suit a client’s needs, budget, build site and lifestyle. Lindal Cedar Homes is headquartered in Seattle, WA, with an international network of independent distributors who work with clients to design and build their dream homes.