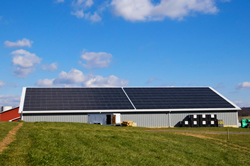 In a constant effort to become carbon neutral, Linganore Winecellars has installed a solar system that will completely power the winery. “It’s sort of cool” said Anthony Aellen, Vice President of Winery Operations. “We’re growing grapes coming from the field and now we’re growing power on the farm as well.”

The Maryland winery recently installed 720 solar panels, each generating 350 watts, for a total of 252 kilowatts. This is enough to power the entire operation, and one of the first wineries to do so in the Mid-Atlantic region. As grapes are grown, harvested, and made into wine, the environment and its future are prioritized.

This is the latest effort, in a long list of green initiatives by the winery including skylight lighting, tracking solar connected to EV chargers, pulp composting, just to name a few. “Seeing the effects of climate change in the last 20 years, we can now grow different varieties that we couldn't grow 20 years ago. It's just warmed up that much! To mitigate this, we had focused on eliminating fossil fuel from generation power, to buying wind power. Now we’re growing our own power and that's really the key,” says Aellen.

“We take our role as stewards very seriously. Back in 2012 we installed EV chargers and now, nine years later, there’s a push to convert vehicle power to electric. You must be able to think a bit further into the future, to think of what your grandchildren and their grandchildren are going to be left with. We can’t just leave this earth and screw it up for everybody else. It’s up to us to make decisions that will bring about positive change. Our aim is to not only to support the land but leave it better than we found it.”