The wounds caused by centuries of slavery, colonialism, apartheid and racism cut deep, and while many of these wounds may have healed somewhat, plenty of scars remain and serve as a painful reminder of what was. In Lindi Tardif’s newest book published by Elm Hill, readers get a firsthand account of what life was like being born in Soweto during apartheid and how a person can learn to forgive those who have severely wronged them. 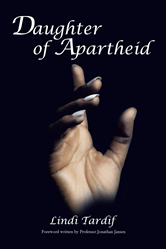 “We’ve come this far…. Think how much further we can go…. We are living in a dispensation our forebears could only dream of, and we have opportunities they could not even imagine. Rather than point our fingers at the past or at others, let’s point and look to the sky and make that our goal.”

Daughter of Apartheid, Lindi Tardif’s newest work, is an eye-opening, personal reflection on her own experiences as someone who was born during apartheid—one of the world’s most controversial political movements that shaped South Africa’s history forever. She lived in a completely different world as a child growing up compared to where she chose to thrive as an adult. Despite having experienced and learned about the poison left behind by ideals like white supremacy and racial segregation, Lindi chose not to let her past define her. Instead, she remained steadfast and God-fearing, allowing herself to reflect inward and then look upward to a brighter future.

“I chose to hold firmly to the things that made me stronger, including my faith and trust in God’s power and ability,” the author shares with readers how her faith in the Lord kept her going despite what she had to live through because of apartheid. “Guided by my parents and grandparents, I learned early on that there are two approaches in life. Either you focus on yourself and the things you can do to improve your life, or you focus on ‘them,’ on inequities and inequalities, on what they have versus what you do not have. Either you focus on hope and possibilities—no matter how slight—or on bitterness and anger.” She also learned that one of the ways that she could put her life on a different trajectory was through making good lifestyle choices.

As Lindi’s dad and granddads actively went against apartheid, they reached out to people from all walks of life with whom they shared beliefs. After all, the only way to go up against ideals meant to divide us is through unity, whether you are Black, White, or any shade in between. The author also calls out those who, despite what they’re fighting for, let their struggles cloud their judgment. “Wouldn’t it be more empowering to see ourselves as a people who have come through severe trials and are just beginning to tap into our amazing potential? We’ve come this far despite all the crap we’ve had to deal with. Think how much further we can go,” the author expresses gratitude for how far she and Black people have come and hopes that the world grows from its dark past as well. “We are living in a dispensation our forebears could only dream of, and we have opportunities they could not even imagine. Rather than point our fingers at the past or at others, let’s point and look to the sky and make that our goal.”