Changing views on autism one donation at a time 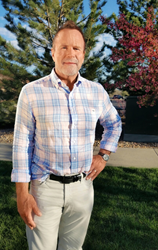 “All children are unique and special in their own way. We need to embrace them and work together to learn to live with the added challenges in their lives as a way to collectively become stronger and more adept at handling life.”

With 1 in 68 children being diagnosed with autism in an early age, the focus of society is shifting towards advancing research and providing a lifetime of support for individuals on the spectrum and their families. And it is through the generous contributions of individuals like Mr. Lloyd Claycomb, founder and CEO of Westminster-based United Builders Service Inc., that non-profits, such as Southwest Autism Research and Resource Center of Phoenix are able to make great strides in the field.

Mr. Claycomb has been on a personal mission for years. His professional success has enabled him to pursue his philanthropic endeavors and support many worthy causes. Over the course of the last few years, the struggle of a close family friend whose son has been diagnosed with autism, became his motivation to focus on charities that educate various professional communities to improve their capacity to serve individuals with ASD.

More specifically, Lloyd and his wife are working towards spreading the word on the neurodiversity movement in an effort to have autism viewed as a variation in functioning rather than as a mental disorder to be cured. Claycomb and his wife, Karen, have raised and donated hundreds of thousands of dollars in an effort to educate and spread awareness of the autism spectrum disorder with the most recent milestone in their philanthropic endeavor including a donation to the Southwest Autism Research and Resource Center of Phoenix in honor of Autism Awareness Month, at its annual fundraising breakfast at the Arizona Biltmore.

In addition to raising $20,000 last week alone, United Builders Service, Inc., made a donation to aid in fundraising efforts. The Claycombs also plan to host a private fundraising dinner for donors to raise additional funds for SARRC. This fundraiser is expected to raise more than $75,000.

“All children are unique and special in their own way. We need to embrace them and work together to learn to live with the added challenges in their lives as a way to collectively become stronger and more adept at handling life,” Claycomb said. “I have built several orphanages around the world, but I don't view my philanthropic work as a way to shine in my community. It is my personal belief that we need to share in the blessings we have been fortunate to have received in our lives with those who most need it.”