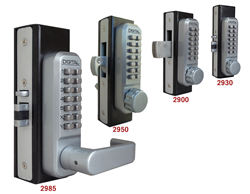 The new Lockey 2900 Series offers a variety of keyless options specifically designed for narrow-stile doors. The 2900 Series is intended for both new installations and retrofitting existing doors with keyless security. The 2900 Series includes keyless entry locks with a throwbolt (2900), hookbolt (2950) and Adams-Rite style latches (2930, 2945 and 2985). All 2900 Series locks are equipped with a 1 1/8" backset.

Utilizing the lock body of the Lockey 2000 Series, the 2900 Series employs narrow-stile latches and bolts to create keyless locks that are perfect for aluminum storefront doors. The throwbolt and hookbolt featured on the 2900 and 2950 are heavy-duty made of 5-ply laminated steel with a concealed hardened steel pin for maximum security. The 2930, 2945 and 2985 are similar to their 2000 Series counterparts (2230, 2435 and 2835), but with an Adams-Rite style latch. The 2930 is an auto-locking Janitor function keyless lock. The 2945 features an inside-lever handle and a hold-open feature. The 2985 offers a lever handle on both the exterior and interior of the door and also features a passage function.

The Lockey 2900 Series has an MSRP starting from $207.90. The keyless locks are available for purchase Online or from any official Lockey Distributor.