Lord Conrad, of Massive Arts Studio in Milan, is receiving much media attention for his newly released digital single “Touch The Sky” 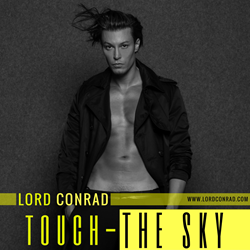 Lord Conrad is a name people will soon hear a lot of because he is already considered a rising star ready to challenge the international charts.

Industry speculators say "Touch The Sky" could become this summer's big entry and a strong new hit on the internationals charts.

Lord Conrad is already known for his lavish lifestyle. The Italian model and singer, known also as THE AESTHETIC LEADER, is now dating a mysterious Polish model.

He describes his new single as a never done before sonorous experiment: a mix between trance and EDM electronic music. His song is lead by beats and melodic stabs of electronic piano with excellent vocal skills. Of course, the lyrics capture his lifestyle perfectly, and an enthusiastic listener stated: "this is a masterpiece of musical art." Additionally, they stated: "Lord Conrad's new music is a perfect combination of melodic and explosive sounds, the perfect combination of a two times speed new generation lifestyle!"

In a special interview, Lord declared that he wrote the song in his underwear at 3 a.m, claiming that this is when he feels most inspired.

His artistic philosophy and his song reflect his own sweet, altruistic and sensitive character.

Here is an excerpt of his philosophy taken from his personal Facebook page: "I love helping and listening to others. I think that every single person has the potential to achieve great things. I believe people should focus on spreading positive messages, and this is what my new single is about. Just be yourself and follow your passion."

Stay tuned as Lord Conrad is already working on the official music video to accompany "Touch The Sky," which will be released very soon.

Lord Conrad is a name people will soon hear a lot of because he is already considered a rising star ready to challenge the international charts.

Find more and listen to this new single on the links below: