Lorette Gay’s New Book “The Daily Battle for a Normal Life: A Memoir” Is a Mesmerizing Tale Evoking the Culture and Landscape of Haiti in the Late Twentieth Century

Recent release “The Daily Battle for a Normal Life: A Memoir” from Page Publishing author Lorette Gay is a compelling novel introducing Olivia Cassis, a young fatherless and virtually motherless girl being raised by her grandparents and aunts in a patrician family in 1960s-era Haiti. 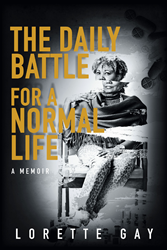 Lorette Gay, a Haitian-born mother of three living with her husband and family in the US., has completed her book “The Daily Battle for a Normal Life: A Memoir”: a riveting story illustrating the challenges and complexity of life for a Haitian-born immigrant to the United States who survives a violent uprising in her native land only to lose everything in a natural disaster in her adopted country and suffer a myriad of chronic medical conditions in later life.

Lorette writes, “Olivia was a townswoman of Haiti whose life has been persecuted in all aspects. She talked about how in her childhood, she became a friend of nature, which impacted her life and abetted her throughout the diversity of many encumbrances. Through nature, she has learned what life is about, and nature has helped her overcome utmost the madness she has encountered along her pathway. She believes that the cycle change in the nature is likened to the cycle change in people’s lives.

"Abandoned by her father while she was only an embryo, a father that had never come across her way, isolated from her mother at the age of six, she was left to be raised by her grandparents. Her existence is marked by many junctures. At an early age, she already knew what sexual harassment is about. She boarded many strangers’ houses. In her teenage years, she traveled virtually the entire country from north, south, and central and has seen things that normal teens haven’t seen and probably won’t ever see in their existence. In her thirties, her husband left her in Haiti with two of her children, after the chaotic presidential overthrow of 1986. Fearing retaliation by an uprising populace, her husband was the first to emigrate in USA because as an act of reprisal toward anyone that had worked for the regime, no matter what your job was, thugs in the streets terrorized everyone (you can be here today and dead tomorrow). In 1987, after passing a long time into hell, in a country still under revolution, she and her children fled to New York. Then ten months after, she moved to Miami with her family, where she made it home in the United States, her adopted country. In 1992, while her life started to recover, her new home was hit by the most violent cyclone, Hurricane Andrew, which had destroyed everything she had amassed. A few years later, her husband left her again to go back to his native land, to stay. This is to ask if everyone that she loves will always find a way to pass as an absentee in her life.

"Over the following years, many chronic diseases have attacked her body, and from there the fun started, the fun game to stay alive. No one would imagine of what she’s going through. She always looks happy, but under the veil of her happiness was hiding all sort of life complications that you would never have thought could happen to one person. Her conviction is that she should not complain about herself. In this world we’re living in, each of us carries secret onuses.

"By experience, she realized that people have a habit of comparing our burdens with the other people’s. It isn’t a fair tactic to support a friend or a family member in despair by associating his or her problem with another. Life is an impartial place for all of us. Don’t presume that some problems are less than others. You exactly detain what you can bear oneself and what was predestined to fit only you.”

Published by New York City-based Page Publishing, Lorette Gay’s book is an engrossing story of perseverance and fortitude in the face of daunting challenges.

Readers who wish to experience this engaging work can purchase “The Daily Battle for a Normal Life: A Memoir” at bookstores everywhere, or online at the Apple iTunes store, Amazon, Google Play, or Barnes and Noble.