“The issue of women and heart disease is serious, as many women go undiagnosed, are misdiagnosed or receive the wrong treatments,” says Dr. von Schwarz. 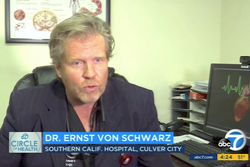 Symptoms of heart disease in women can differ greatly from the symptoms that men experience.

Cardiologist Ernst von Schwarz, MD says that women can experience unique warning signs of heart disease which can be mistaken for other issues or ignored completely by their doctors. “This can be especially dangerous in younger women who may not realize that they are at risk," he says. "Fortunately, women can educate themselves on symptoms that are unique to women so they may become better advocates for themselves when seeking medical advice.”

Dr. von Schwarz, MD appears in an interview on ABC 7 news Los Angeles with his patient and health reporter Denise Dador to show how heart disease in women is often misunderstood and misdiagnosed, largely because women often experience symptoms that differ from the symptoms typically reported by male patients.
Link to the story: https://youtu.be/hg_XGR1JWSg

Dr. von Schwarz' patient Tara, 40, first learned she had heart disease at age 29 after going misdiagnosed for several years although she was experiencing symptoms including chest pains and a racing heart. Tara was told by doctors that she was just "too stressed" or was "drinking too much coffee." Eventually Tara ended up in a hospital emergency room in shock from a pain medication she used for the first time. In the ER, Tara’s heart function was found to be "extremely low" and Dr. von Schwarz was called in to assess her. Tara ultimately underwent several procedures including having a pacemaker implanted and a later surgery to repair a damaged heart valve.

About a year after her heart valve surgery Tara learned that she was pregnant. She was advised by her primary care physicians that her pregnancy would present a serious risk to her health, but Tara was determined to have at least one child with her husband. When her doctors were reluctant to care for her during her pregnancy she turned to Dr. von Schwarz who saw her through to term. Tara beat the odds, ultimately giving birth to healthy twin boys who are now 8 years old.