Los Angeles Community Rises in the Fight Against Hunger

San Marino Girl Scouts package 2,500 meals to be sent to kids in need across the world 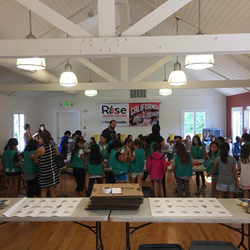 “We wanted to to thank Rise Against Hunger for working with us today because there aren’t many opportunities for young kids to directly participate in making a difference,” said seventh grader, Claire Littman.

Rise Against Hunger and the Girl Scouts of San Marino joined forces on Friday to celebrate the official launch of the international non-profit’s dedicated location in the Los Angeles area. The scouts packaged 2,500 meals to be sent to children — just like the scouts — in critical need across the world.

Rise Against Hunger’s vision is to end hunger by 2030, which is also aligned with the United Nations as Sustainable Development Goal 2. The organization’s Meal Packaging Events are a volunteer-based program that coordinates the streamlined packaging of highly nutritious dehydrated meals comprised of rice, soy, vegetables and 23 essential vitamins and minerals. After packaging, the meals are shipped to countries around the globe and distributed to beneficiaries in critical need.

“We wanted to to thank Rise Against Hunger for working with us today because there aren’t many opportunities for young kids to directly participate in making a difference,” said seventh grader, Claire Littman. “We are very excited about our first partnership with Rise Against Hunger and certainly hope it won’t be our last one.”

At the event, Councilwoman Gretchen Shepherd Romey, gave the Girl Scouts special Rise Against Hunger badges to commemorate their effort to provide meals to kids in need around the world. Stephen Wawryk, Community Engagement Manager of Rise Against Hunger L.A., spoke about the importance of adding a dedicated location to the area.

"I'm excited to bring a location to L.A. because we're helping those across the world who are the most vulnerable and don't know where their next meal is coming from — we're giving them hope, we're giving them life,” said Wawryk.

Rise Against Hunger operates meal packaging locations in 25 cities throughout the U.S. and five international locations in South Africa, Malaysia, the Philippines, Italy and India. The organization’s L.A. location is the third of four new Golden State locations to open this summer. Rise Against Hunger projects that the addition of the L.A. location will lead to over 800,000 meals packaged by the end of 2018.