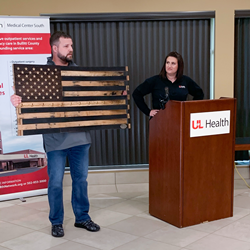 Chris & Amber Cruise at U of L Health, donating proceeds from the company's "One Heartbeat" bourbon barrel flag.

“America has shown up in a very big way. We have received an overwhelming amount of orders and have been able to sell a flag in every state,” Chris Cruise said.

The project was conceptualized as an instrument for supporting frontline healthcare workers during the global pandemic. The special edition, “One Heartbeat” flag has one stripe / bourbon barrel stave containing an etched heart rhythm just below the flag’s stars. The Shepherdsville-based company donated 100% of its “One Heartbeat” flag sales to the medical community.

“America has shown up in a very big way. We have received an overwhelming amount of orders and have been able to sell a flag in every state,” Chris told “Fox and Friends” while sitting beside Amber, both donning matching “One Heartbeat” shirts.

Over 5,000 flags were purchased in just 60 days allowing Cruise Customs Flags to donate $70,000, splitting the proceeds between two Louisville hospital systems, UofL Health and Norton Healthcare. “We’ve been able to do some amazing things with this money. We’ve created ‘zen rooms’ in the hospitals that are relaxation spaces where workers can go to get a mental break from this. Proceeds have also helped feed them during long shifts,” Amber added. Thanks to the influx of “One Heartbeat” orders, Cruise has also been able to hire more employees--specifically veterans--not only providing monetary contributions to nearby hospitals, but also providing jobs to the local economy.

The Cruises, themselves, have served on the frontlines, albeit in different capacities. Chris is an Army veteran and Amber a healthcare worker, so they view this as a patriotic way to honor the brave people who comprise both of their fields.

This isn’t Cruise Customs Flags’ first appearance on Fox. Their bourbon barrel flags were featured on “Fox and Friends” in July 2019 discussing the veteran-crafted flags on National Bourbon Day.

To support the causes while enhancing your space, visit https://cruisecustomsflags.com.