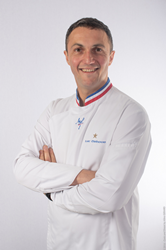 I am delighted to support the ENSP team in their development in France and abroad.

Luc Debove was appointed Executive Pastry Chef at École Ducasse – École Nationale Supérieure de Pâtisserie (ENSP), located in Yssingeaux in the Haute-Loire region of France, and regarded as a global benchmark in the art of pastry and ice-cream making. Having built an exceptional career over the past 30 years in Michelin-starred establishments and renowned learning institutions, Debove’s credentials include the titles of World Champion of Ice Cream and Meilleur Ouvrier de France in Ice Cream-Making. He will be an asset for the development of the ENSP both in France and abroad.

After earning a Certificat d’Aptitude Professionnel (CAP) in pastry, completing an apprenticeship in pastry, confectionery and chocolate-making, and obtaining his Master Pastry Chef diploma in 1996, Debove joined the Meridien Beach Plaza in Monaco in 1999 as Pastry Chef, before moving on to the Royal Riviera hotel in St-Jean Cap Ferrat. At the same time, he became a faculty member for the Maîtrise en pâtisserie taught by the Chambre des Métiers des Alpes-Maritimes. He then relocated to Paris as a pastry-making instructor at École Bellouet Conseil.

From 2007 to 2016, Luc Debove served as Pastry Chef at the Grand Hôtel du Cap Ferrat, the renowned Michelin-starred Four Seasons hotel on the French Riviera where he headed a brigade of up to 25 pastry chefs.

Apart from these professional experiences, Debove took part in numerous competitions throughout his career. He won first prize for Sugar Art Creations in 1995 in Nice, as well as first prize in the 2006 French National Ice Sculpture Cup. In 2008, he was awarded the title of French Ice Sculpture Champion, followed by first prize in the European Championship of Frozen Desserts at the Sirha world hospitality and food service event in Lyon.

In 2010, he was crowned World Ice Cream Champion in Rimini, and named Meilleur Ouvrier de France in Ice Cream-Making in 2011. His was awarded with the distinction of the National Order of Agricultural Merit in 2015.

This broad range of experience enabled him to acquire valuable qualities and to be equally at ease in the making of pastry, ice cream, bakery products, confectionery and chocolate, as well as in teaching and passing on the know-how that he has now decided to place at the service of École Ducasse – École Nationale Supérieure de Pâtisserie.

Today, at the age of 47, Luc Debove is taking up the position of Executive Pastry Chef at the Yssingeaux school: "I am delighted to be joining the ENSP team and support them in the next few years in their development in France and abroad.”

Debove will be responsible for working with the ENSP teams to develop the school's future programs and promote their reputation both in France and abroad, as well as delivering masterclasses for young learners and professionals. As an ENSP ambassador, he will strengthen the school's international influence through events, training and advisory activities, along with the launch of new courses.

Elise Masurel, Managing Director of École Ducasse, said: "We are delighted to be able to count on the outstanding talent of Luc Debove, who will be a tremendous asset in promoting the expertise of École Ducasse schools around the world.”

About École Ducasse
École Ducasse is a network of schools founded in 1999 by multi-starred chef Alain Ducasse, dedicated to the transmission of outstanding French expertise based on excellence in culinary and pastry arts.

École Ducasse runs three schools in France – the Paris Studio, the Paris Campus and the École Nationale Supérieure de Pâtisserie – as well as two international schools (in the Philippines and Brazil). All are united by a desire to share a passion for gastronomy with seasoned professionals as well as food enthusiasts, career changers and students.

This broad portfolio of programs aims to meet all training needs: from short programs for experts or food enthusiasts to intensive two-, four-or six-month programs, to three-year undergraduate programs leading to a Bachelor’s degree in culinary and pastry arts.

École Ducasse transmits the highest standards of its professions with an exceptional staff, teaching managerial and entrepreneurial skills along with practical training to ensure perfectly mastered techniques.

École Ducasse is a network of schools belonging to the Sommet Education, a major international education group for hospitality management and culinary arts.

For more information go to: https://learn.ecole-ducasse.com