Luxtor solves two major RV ownership headaches; where to store and where to service your RV. Both of these services are hard to find, and waiting time for repairs are long. 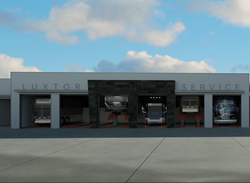 An RV owner who has a breakdown in June, may not be able to get his coach back on the road until September.

Mike Lyon, creator of Luxtor RV Garage Condominiums has had tremendous success selling RV and Car Garage condominiums, that are purchased rather than rented. These have turned out to be a haven for those wanting a Man Cave, where you can build them out with the only limitation being your mind. A novel idea that has just about sold out his two developments in Prescott, Arizona and Coachella, California before they were completed. Mike Lyon said, "RV Storage has been a problem in California for a very long time, due mainly to the land costs, and extreme developer fees imposed by the various cities or counties." Mike continued, "We have found that owning your own garage has proven to be a winner, with annual appreciation in the past averaging about 10% year. Our research has shown there are seven Garage Condominium projects in California, with all of them sold out, except for the newest Garage Condominium project, Luxtor in Coachella. As of this writing, there are 10 Garage Condominiums left.

Mike said, "there is another challenge to RV ownership and that is, where to get your RV serviced or repaired?" Mike continued, "it is common for appointments for RV service or repair can extend out for several months." An RV owner who has a breakdown in June, may not be able to get his coach back on the road until September. As a result of the strong demand for RV service and repair, Luxtor has created 6 service bays for the repair and service of all RV's, while also being a Prevost factory authorized warranty repair center. Jeremy Maul, Luxtor's Executive Vice President said, "Customer service should not be a department; it should be the entire company." Jeremy continued, " We will be working hand-in-hand with Prevost and all of our vendors to make sure our techs have the most up to date training and service bulletins." Jeremy continued, "we will also work with all of our vendors to host on-site training classes for our techs and for our customers." Shane Nalley, Luxtor's General Manager says, "I have been in the RV service as the service manager for a major entertainer coach company, maintaining a fleet of seventy Prevost coaches and managing four departments." Shane continued, "We are excited to add the Luxtor Service department to the Coachella location and have built a great team to serve our customers."