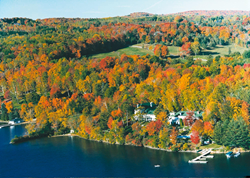 Travelers and mystery lovers can channel their inner detective with a special luxury getaway at Quebec's Manoir Hovey.

Canada’s beautiful Eastern Townships region has been the perfect setting for the dark deed of murder for Louise Penny, a frequent guest at Manoir Hovey. Located in southeastern Quebec, just over the border from the U.S., the area once offered refuge to British loyalists. Today, these charming, historic villages, which inspired the town of Three Pines, entice travelers with country roads, lakes, bakeries and bistros.

One of these towns, North Hatley, is the home of Manoir Hovey, a beautiful white-columned building on Lake Massawippi. The Inn’s setting and some of its rooms are familiar as Manoir Bellechasse in The Murder Stone/A Rule Against Murder, and it is where Chief Inspector Armand Gamache and his wife make their annual visit to celebrate their anniversary.

Guests booking the Vive Gamache! getaway, which starts at $215 per person, will receive a signed copy of The Long Way Home; a copy of the Three Pines Inspirations map with points of interest featured in Penny’s books; a Vive Gamache! mug and tote bag; a full-course dinner at Manoir Hovey’s restaurant, Le Hatley; a full breakfast, and a complimentary room upgrade or late departure (based on availability). They’ll also find a Gamache trivia quiz in their room at turndown, which they can complete for a chance to win a stay at the Inn. For details about the Vive Gamache! package, visit http://www.manoirhovey.com/en/vive-gamache.

“We’ve enjoyed hosting Louise Penny during her many stays at Manoir Hovey over the years, and we consider her part of our extended family,” said Manoir Hovey managing director Jason Stafford. “We’re delighted that she’s been charmed enough by our resort to include us in her books, and we’re excited to be able to provide guests and fans with this unique experience.”

“I've been visiting Manoir Hovey for 30 years, and found beauty and peace there in all seasons, as well as the most wonderful atmosphere, food and service,” said Louise Penny. “In my books, setting is character, and while they’re crime novels, they are also love letters to Quebec, and places that mean a lot to me. It was such fun setting one of the Gamache books in the Manoir Bellechasse - aka Manoir Hovey.”

About Manoir Hovey
Located just 75 minutes from Montreal, Manoir Hovey is a five-star Relais & Châteaux property on the shores of Lake Massawippi. One of Canada’s most charming and romantic inns, it has 37 beautifully appointed rooms and suites, year-round activities, and hosts weddings, conferences and special events. Its award winning restaurant, Le Hatley, showcases the finest regional cuisine and extensive wine list. Overlooking the lake and surrounded by English gardens, the dining room has a tranquil setting with breathtaking views. For reservations and information, visit http://www.manoirhovey.com.

About Louise Penny
Louise Penny, a former CBC radio journalist, is The New York Times and Globe and Mail bestselling author of 10 Chief Inspector Armand Gamache novels. She has been awarded the John Creasey Dagger, Nero, Macavity and Barry Awards, as well as two each of the Arthur Ellis and Dilys Awards. Additionally, Louise has won five Agatha Awards and five Anthony Awards. Her most recent novel, How the Light Gets In, was a #1 New York Times bestseller. She lives in a small village south of Montréal with her husband, Michael.

The Vive Gamache! package at Manoir Hovey features a copy of The Long Way Home, Louise Penny's newest novel, signed by the author.

Louise Penny is the author of ten mystery novels featuring the character of Chief Inspector Armand Gamache. The books are set in Quebec's Eastern Townships region.