L.W. Deutsch Pens a New Riveting Story of Faith amidst the Madness of War

How will ‘The Engineer’ set free a captive people from the Nazi death trains and spread the Good News of God’s plan for salvation? 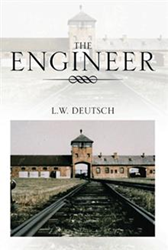 A majority of the German people thought of Hitler as a messiah sent to restore Germany after it's devastating loss in the First World War. As for Wolfgang Spreitzel, there is only one true Messiah, and He is Jesus Christ.

When Adolf Hitler became dictator of Nazi Germany he abolished all political opposition to the Nazis and banished all religions except for the official religion which was the state itself. A majority of the German people thought of Hitler as a messiah sent to restore Germany after it's devastating loss in the First World War. As for Wolfgang Spreitzel, there is only one true Messiah, and He is Jesus Christ.

"The Engineer", is a powerful historical fictional novel written by author L.W. Deutsch tells of how some courageous people risked all to save some of those destined to death at the Dachau concentration camp in Germany. This story revolves around the Spreitzel family and how the madness of Hitler during the Second World War tested their faith in God. Wolfgang a God fearing man has his family torn apart by the war. Wolfgang and his wife Helga raised their two children, Deitzel and Eva in the Christian faith. The children's physical features are strikingly similar but their faiths are completely changed during the war. Deitzel volunteers for the military and became a captain in the elite Schutzelstaffel or better known as the SS while Eva fulfilled her dream of becoming a physician. Wolfgang's heart is being torn apart because Deitzel has rejected his faith in God and believes there is only one god and he is Hitler. Deitzel now lives and loves the darkness because his deeds are pure evil.

Wolfgang is hired by the state run railway as an engineer and has traveled to the concentration camp at Dachau which is one of the first types of camp to exterminate anyone who opposes the Nazis. However, Dachau eventually becomes Deitzel's military assignment and he is posted there. Wolfgang is inspired to develop a plan to liberate some of those at the camp even under the watchful eyes of Deitzel. How will he manage this herculean task? Can he bring Deitzel back to God?

"The Engineer" reflects on the horrors of the Second World War in Nazi Germany. It tells the story of how a madman can destroy millions of people but also that a few people can save many. Readers will surely admire the characters as they defy the Nazis and free people from certain death. This story begins with one man on a mission from God. It will appeal to readers of all faiths and also those of no faith because this story is one of the oldest stories in human history, good versus evil, light versus darkness, and the triumph of the human spirit.

About the Author
L.W. Deutsch currently resides with her beloved wife Mari in New Jersey. This is his first published work but he have always enjoyed writing all types of fictional stories throughout his life. His only regret with this book is that both his parents are not alive to share in his joy of becoming a published author.