Lynn Ahrens, one of the most revered and prolific lyricists in the history of Broadway and film, is celebrated in this special free event. 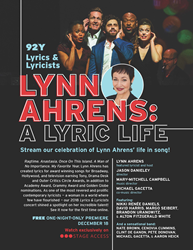 We’re all trying, in our own ways, to do what we can. I hope people will not only enjoy the program but will be moved to donate.

Ragtime. Anastasia. Once On This Island. A Man of No Importance. My Favorite Year. Lynn Ahrens has created lyrics for award winning songs for Broadway, Hollywood, and television earning Tony, Drama Desk and Outer Critics Circle Awards, in addition to Academy Award, Grammy Award and Golden Globe nominations. Ahrens is one of the most revered and prolific contemporary lyricists — a woman in a world where few have flourished. In 2018, 92Y’s Lyrics & Lyricists series shined a spotlight on her incredible talent! See it now for the first time online.

Presented free for one night only, Ahrens’ intent is to help raise funds for a number of organizations that directly benefit and impact members of the theatrical community who are in need of help during the pandemic.

“We’re all trying, in our own ways, to do what we can. I hope people will not only enjoy the program but will be moved to donate” says Ahrens.

After the 18th, the program will continue to be available on Stage Access for a limited period of time to subscribers.

ABOUT STAGE ACCESS™
STAGE ACCESS™ is the on-demand streaming platform featuring iconic content in dance, opera, concerts and theatre with a growing list of performing arts original content including Yo-Yo Ma, Six Solo Bach Cello Suites from the Odeon, Athens and The 3 Tenors: From Caracalla to the World, The 30th Anniversary Documentary. Currently available in North America on the web at http://www.stageaccess.com, iOS, Android, Apple TV, Amazon Fire and Roku, STAGE ACCESS™ was founded by Bruce H. Lipnick with the mission of expanding access to the arts and providing support for arts organizations. Tripp Hornick of Quince Street Strategy leads operations.