M.P. Web's new book “US" entails Paul Fuller’s chaotic journey through an apocalyptic landscape—one he’s forced to navigate in search of answers and a chance at survival.

Recent release “US" from Page Publishing author M.P. Web explores the mindset and actions of a man clinging to what remains of his sanity, all the while attempting to rationalize the unimaginable events unfolding around him. 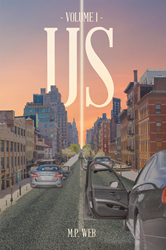 M.P. Web has completed his first novel “US”: a supernatural, apocalyptic thriller that delves into the new and frightening reality of mankind’s suddenly bleak and fragile existence. Mysteriously paired with someone whose survival is just as baffling as his own, the two do whatever is necessary to prevail against the odds. When cryptic pieces of mankind’s past begin to be revealed, the puzzle of life and their current reality only gets deeper.

Web writes, “Two hours into their drive the next morning, the dirt road disappeared. It had been the last thing even remotely indicating any sense of previous inhabitance. An ocean of sand and rock gradually replaced the sparse, monotonous landscape he was slowly becoming numb to. Judging by the sun, they were currently going south, kicking up a trail of dust nearly a mile long in their wake. Once more, a growing part of him couldn’t dismiss the notion that he was only dreaming. This had that same edge to it, that unsettling feeling you got upon realizing things are out of your control; he thought of it as the bystander scenario: the dreams—or sometimes real-life situations—where all you can do is stand there and watch.

He had no clue where they were driving to in the middle of this obscured stretch of desert, but the change in her demeanor over the last hour had him concerned. She seemed focused but on edge, continually checking her mirrors for some unknown reason—almost as if she were expecting company. Despite his nagging curiosity, Fuller remained silent. Regardless of how many he had, his questions could wait.

In no apparent set direction, she drove deeper into the lifeless, arid wilderness. Sometimes the sun was directly ahead as they wove through the inhospitable terrain; other times, it was on their left or right. He was in constant worry that their enormous vehicle would get stuck out there, yet the desert ground remained solid under its tires.”

Published by Page Publishing, M.P. Web’s suspenseful new novel will pull you immediately into Fuller’s perilous new world in riveting detail—where the differences between make-believe and reality aren't always in black and white.

Readers who wish to experience this riveting work can purchase“US" at bookstores everywhere, or online at the Apple iTunes Store, Amazon, Google Play, or Barnes and Noble.