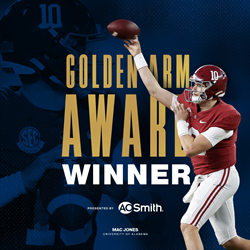 In his first full season as the University of Alabama’s quarterback, Jones has led his team to an 12-0 record, an SEC title win and the top seed in the College Football Playoff. In addition to being named to the All-SEC First Team, the 22-year-old is also the SEC Scholar-Athlete of the Year, completing 275-of-357 passes for a nation-leading completion percentage of 77.0 while his passer rating of 203.0 is also first. Jones has thrown for 4,036 yards (second-most in the nation) and 36 touchdowns (tied for second most). Additionally, Jones threw for over 400 yards four times (the most in a career in Alabama history), including three times in a row against Texas A&M (435), Mississippi (417) and Georgia (417) and tossed four or more TDs six times, including two games with five against Auburn and Florida in the SEC title game (to go with 418 passing yards). The Florida native completed over 80.0% of his passes three times and completed at least 74.1% of his passes in eight of 11 games.

In what has been the most unprecedented year for college sports, the Johnny Unitas Golden Arm Award like many other awards has had to make changes to protect all of those involved. This year’s presentation to honor Jones’ achievements will be pre-recorded and released on Thursday, January 7 on the Golden Arm Award social channels and shared by the University of Alabama.

The Golden Arm Award is presented annually to the top upperclassman quarterback set to graduate with their class. The award acknowledges performance on the field, but it goes beyond completion percentage and touchdown strikes. The award values character, citizenship, integrity and those who honor the game. The semifinalists, finalists, and award recipient are selected by the distinguished Golden Arm Award Selection Committee, a group of prominent football journalists, former coaches and players, general managers, commentators, announcers, and other former award recipients.

Since the Award’s inception, the Johnny Unitas Golden Arm Educational Foundation has donated over $750,000 through college scholarships to graduating high school scholar athletes to pursue their higher education and continue playing football. In addition, the Foundation gives back to community youth football leagues in both Kentucky and Maryland.

Sharing a tradition of innovation with Johnny Unitas, who invented football’s two-minute drill, A. O. Smith has been an innovator in its industry for more than a century. A. O. Smith offers its customers an additional advantage in that the company designs, builds, distributes and supports the world’s broadest and deepest line of residential and commercial water heaters, as well as commercial boilers. This single-source concept simplifies ordering, installation and service and is backed by 80 years of research and innovation.

If you would like to participate and join in on the Foundation’s mission to provide our youth with a quality education while promoting the game of football, please send your tax-deductible contribution to The Johnny Unitas Golden Arm Educational Foundation, Inc. or visit our website to contribute. To learn more about the Golden Arm Award, please visit: Golden Arm Award. Additionally, please follow the conversation throughout the college football season on Twitter and use the hashtags #GoldenArmAward and #InnovationLeaders.

About A. O. Smith
A. O. Smith Corporation is a leading global manufacturer and marketer of residential and commercial water heaters. A. O. Smith offers its customers an additional advantage in that the company designs, builds, distributes and supports the world’s broadest and deepest line of residential and commercial water heaters, as well as commercial boilers. This single source concept simplifies ordering, installation and service and is backed by 80 years of research and innovation. For the most up-to-date A. O. Smith news, like us on Facebook, follow us on Twitter and visit http://www.hotwater.com/.