Power of You(th) arms teens with the knowledge to say no. 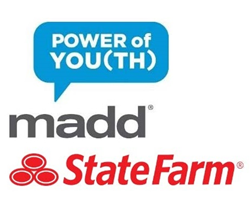 As a mother, I know we can’t always be there to keep our children safe. What we can do is give them the information they need to make smart, healthy decisions.

Mothers Against Drunk Driving® (MADD) and national presenting sponsor State Farm® are encouraging teens to get the facts about alcohol and marijuana this fall through MADD’s Power of You(th)® program.

With Halloween coming up and homecomings and fall festivals underway, MADD is joining its partners around the country to host school and community events that arm teens with knowledge, tips and tools to say no to alcohol and other drugs before age 21 and to tackle common myths around both.

“As a mother, I know we can’t always be there to keep our children safe,” said MADD National President Helen Witty, whose 16-year-old daughter, Helen Marie, was killed by a 17-year-old driver impaired on alcohol and marijuana. “What we can do is give them the information they need to make smart, healthy decisions.”

“These deaths devastate families and, often, entire communities,” Witty said. “For those left behind, underage drinking can also have life-altering consequences. The teen driver who killed my daughter went to prison for six years for manslaughter.”

A teen booklet available at http://www.powerofyouth.com helps empower youth with facts and real stories from teens who experienced real ramifications, both positive and negative.

“The facts are these: Not every teen is doing it. In fact, most aren’t. But for those who do, underage alcohol and drug use can have impacts both immediate and long-term,” Witty said. “A teen’s brain is developing just as their body is changing and maturing. That means it is more easily damaged by alcohol and drugs. Some of that damage can last a lifetime. We also know that young people who begin drinking at 15 are six times more likely to become alcohol dependent or even abuse alcohol later in life.”

In addition, Power of You(th) takes on marijuana myths with facts: About one in 10 marijuana users will become addicted – for those who start before age 18, that rises to one in six.

“Marijuana doesn’t make you smarter or more focused. It especially doesn’t make you a better driver. Marijuana directly affects the parts of the brain responsible for memory, learning, attention, decision making, coordination, reaction time and emotion. For teens with developing brains, those affects are amplified,” Witty said. “This month and always, MADD wants to remind teens to stay safe by saying no to alcohol and drugs and to always find a safe and sober ride home.”

View the Power of You(th) booklet and learn more at http://www.powerofyouth.com.

About Mothers Against Drunk Driving
Founded in 1980 by a mother whose daughter was killed by a drunk driver, Mothers Against Drunk Driving® (MADD) is the nation’s largest nonprofit working to end drunk driving, help fight drugged driving, support the victims of these violent crimes and prevent underage drinking. MADD has helped to save more than 350,000 lives, reduce drunk driving deaths by 53 percent and educate parents and teens on making safe choices. MADD’s Campaign to Eliminate Drunk Driving® calls for law enforcement support, ignition interlocks for all offenders, advanced vehicle technology and designating a non-drinking driver. MADD has provided supportive services to nearly one million drunk and drugged driving victims and survivors at no charge through local victim advocates and the 24-Hour Victim Help Line 1-877-MADD-HELP. Visit http://www.madd.org or call 1-877-ASK-MADD.

About State Farm®
The mission of State Farm is to help people manage the risks of everyday life, recover from the unexpected, and realize their dreams. State Farm and its affiliates are the largest providers of auto and home insurance in the United States. Its nearly 19,000 agents and approximately 58,000 employees serve approximately 83 million policies and accounts – approximately 81 million auto, fire, life, health and commercial policies and approximately 2 million bank accounts. Commercial auto insurance, along with coverage for renters, business owners, boats and motorcycles, is available. State Farm Mutual Automobile Insurance Company is the parent of the State Farm family of companies. State Farm is ranked No. 36 on the 2019 Fortune 500 list of largest companies. For more information, please visit http://www.statefarm.com.