Madestella C. Holcomb’s newly released "For Such A Time As This" is an impassioned love story of one man's search for his true identity

"For Such a Time as This" from Christian Faith Publishing author Madestella C. Holcomb, is a stirring novel of love and survival of an interracial couple in an era of America's racial prejudice. 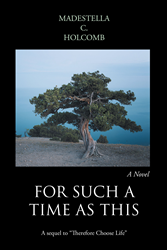 Holcomb shares, “It is 1946, a dangerous time in the United States of America when minorities are persecuted, segregated, and denied their rights as equal citizens. It is a time when Darius Paul Deavers, a young White man, defies tradition, laws, and family for the right to marry his childhood sweetheart, Ariel Sage Copple, who is Black. He and Sage move to the state of Washington where interracial marriage is legal. He tries to deal with the pressures and all the mean things that happen to him because of his Black wife.

“The novel probes our most deeply held racial prejudices in a love story with all the extraordinary drama and overwhelming emotion as Darius travels down several avenues in search of himself as a White man. He is reminded by his father of Esther and Mordecai, who acted as God’s servants in a time of racial crisis. He tells Darius that, most likely, he and Sage were sent here for such a time as this to try and heal some of the world’s wounds. ‘For Such a Time as This’ is a brilliant love story embedded in one man’s search for his true identity.”

Published by Christian Faith Publishing, Madestella C. Holcomb’s new book is an enriching masterpiece that reveals the beauty of love that triumphs against the odds of racial discrimination. This book also depicts an enthralling journey as Sage helps Darius to find the true meaning of life and the need of having a solid foundation, for his true identity can flourish.

View the synopsis of “For Such a Time as This” on YouTube.

Consumers can purchase “For Such a Time as This” at traditional brick-and-mortar bookstores or online at Amazon.com, Apple iTunes store, or Barnes and Noble.

For additional information or inquiries about “For Such a Time as This,” contact the Christian Faith Publishing media department at 866-554-0919.
You may also contact the author, at 303-333-4480