Madi Davis from The Voice Debut Album Release - Above The Waves 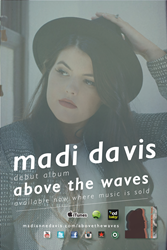 I chose to continue to do what I love

Madi Davis recently ended her run on NBC’s The Voice as a Top 6 Semi-Finalist! She shared her heart and artistry with the world singing brilliant arrangements of classics; Big Girls Don't Cry, Girls Just Want To Have Fun & A Case of You. Her version of Girls Just Want To Have Fun charted in Billboards Hot 100 and topped the overall iTunes charts at #5. All of her performance recordings made iTunes overall Top 50. Madi definitely made her mark as an artist on the show, singing what she loves, with poise beyond her years...all 16 of them.

Fresh off of her recent endeavors on The Voice, Madi Davis went straight to work on an all original full length album. Working with The Voice Band and other musicians was a transformative experience and she left performances inspired to write songs. The new release, Above The Waves, contains songs that reflect her experiences on and off the show. She capitalizes on emotions and truth with her songwriting. The album captures everything we have come to love from Madi as a Singer-Songwriter. The LP, Above The Waves, consists of ten original recorded & mixed at Michael Child Studios in McKinney, Texas. It was co-produced by Michael Child and Darius Scott. The album reveals a stunning array of influences that have found their way into Madi’s music.

The title track, "Above the Waves," embodies the attitude Madi carried throughout the making of this album. The song was written right when she came home from The Voice. In it, Madi reflects on her Post-Voice life and the challenge of starting over. She says, "I wrote "Above the Waves" because though at times it would feel like I was drowning in my sorrows, I chose to continue to do what I love, which is writing, recording, and most of all - singing."

The album was scheduled to be launched, July 9th, 2016 but Madi chose to delay the release to the following week as a moment of silence to show respect to all the victims of recent tragic shootings. Madi said, "After the death of Christina Grimmie, the deaths of Philando Castile and Alton Sterling, and the Dallas Police Shootings, I was having a very hard time feeling alright with releasing music after so many tragedies. So many lives lost deserved a moment of silence. So that is what I tried to do with the delay of the album release." The release was followed up with a supporting tour including dates in Chicago and NY. Above the Waves, debuted at #18 on the iTunes Singer-Songwriter Charts. All of Madi's music is available online-- on cdbaby, iTunes, Google Play and Spotify. More information on Madi and her music is available on her website http://www.madiannedavis.com.

Above The Waves Banner2