MaintenX is sponsoring a Habitat for Humanity home build in Largo, Fla. They have already worked 600 volunteer labor hours. 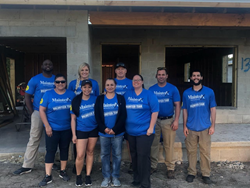 MaintenX volunteers are helping to build a MaintenX-sponsored Habitat for Humanity home in Largo, Fla.

The build been a true team effort; employees at every level of the organization have participated, and every volunteer slot has been filled.

MaintenX International, one of the largest facility maintenance and repair companies in the nation, is well underway on the Habitat for Humanity home they sponsor in Largo, Fla. The home build began two weeks ago, and in that time MaintenX employees have volunteered 600 hours on the project. They expect to work another 700, with the total amount reaching 1300 hours – more than six times the required amount for sponsor organizations.

MaintenX is preparing the home alongside Monique Woodard, the home’s recipient. Woodard is participating through the Habitat for Humanity of Pinellas and West Pasco chapter, who recently shared drone footage captured by the MaintenX team of the home’s progress.

“The progress we’ve made already is exciting, and it’s heartwarming to be a part of,” said Bill Schaphorst, MaintenX’s VP of Development. “The build been a true team effort; employees at every level of the organization have participated, and every volunteer slot has been filled. Our corporate culture of social responsibility has really expressed itself in this project.”

So far, 86 team members have participated in the build, including corporate leadership at all levels. Additionally, MaintenX employees from North Carolina arrived to help build this past week, and the California team will fly in later in May to help. MaintenX is providing #MaintenXGives shirts and lunch for employees on all build days so volunteers can look and feel their best.

Over the next few weeks, Habitat for Humanity team members and volunteers will begin hanging dry wall, and the MaintenX team will return to volunteer with flooring and interior trim work in mid-May. MaintenX is proud to be able to be a part of the creation of a home for the Woodard family.

MaintenX has always placed an emphasis on giving back to their local community. They also believe it’s important to give quality service and satisfaction to their customers from coast to coast. To learn more about MaintenX and their 40 years of superior service, visit http://www.maintenx.com.