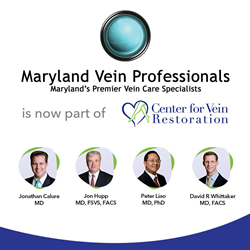 For over a decade, both CVR and MVP have been serving the community, providing the highest excellence in vein care... By joining forces, we can collectively serve more patients while moving the needle forward on treating venous disorders.

Center for Vein Restoration (CVR) is proud to announce a new partnership with Maryland Vein Professionals (MVP) – a major vein group in the state of Maryland, founded and directed by Jonathan Calure, MD since 2005. MVP locations in Columbia, Annapolis, and Towson, served by Dr. Calure and his physician team, Jon A. Hupp, MD, FSVS, FACS; Peter Liao, MD, PhD; and David R. Whittaker, MD, FACS, will now join the network of 85 CVR locations nationwide and 17 in the state of Maryland alone. MVP has been long known for its outstanding patient care, board-certified physicians, and clinical expertise. Through this partnership, gold-standard vein care will be available to more Maryland residents than ever before.

Dr. Jonathan Calure was the President and Surgical Director of Maryland Vein Professionals for 15 years. As one of the first physicians in the Baltimore-Washington-Annapolis area to perform the Venous Closure® procedure, Dr. Calure is a national leader in the technique, performing over 30,000 treatments so far. Dr. Calure has two certifications by the American Board of Medical Specialties; he is board-certified in General Surgery and Thoracic-Cardiovascular Surgery. Dr. Calure is trained in both classic open surgical techniques, and is broadly trained in minimally invasive, video assisted, and catheter-based techniques.

A lifelong resident of Maryland, Dr. Calure has had the distinction of practicing Cardiac Surgery in the hospital of his birth, The Washington Adventist Hospital. Dr. Calure completed his undergraduate degree in Aerospace Engineering as a Chancellor's Scholar at The University of Maryland. While working part-time as an engineer at The NASA Goddard Spaceflight Center, he earned his Doctor of Medicine from the University of Maryland School of Medicine. Dr. Calure completed his General Surgery Residency as well as his Cardiac Surgery Fellowship at the University of Maryland Hospital in Baltimore. Dr. Calure is a member of The American Vein and Lymphatic Society, The International Society of Endovascular Specialists, and The Society of Thoracic Surgeons. He will be practicing out of the Columbia, MD - Columbia 100 Parkway location.

Of the partnership with CVR, Dr. Calure said, “For over a decade, both CVR and MVP have been serving the community, providing the highest excellence in vein care with our board-certified teams, IAC accredited clinics, and dedication to the research and advancement in the field of phlebology,” Calure continued, “By joining CVR, we can collectively serve more patients while moving the needle forward on treating venous disorders.”

Dr. Sanjiv Lakhanpal, CEO; Dr. Khanh Q. Nguyen, Chief Medical Officer; and Ken Abod, CFO at CVR are all pleased to welcome Dr. Calure, Dr. Hupp, Dr. Liao, and Dr. Whittaker, as well as the rest of the MVP team, to the company. “We are truly humbled by Dr. Calure’s decision to join his team with ours. With the MVP team at our side, our vision to ‘to continuously redefine the care of patients with venous disorders’ seems more in reach than ever before.”

The other MVP Physicians joining CVR include:

“Every one of these doctors represents the clinical expertise and values of CVR as a whole, and we are so proud to have them on our team,” concluded Dr. Lakhanpal.

Venous insufficiency, the cause of significant suffering due to the sequelae of venous hypertension, most commonly arises as achy, tired and heavy legs. It may or may not be associated with varicose veins, spider veins or skin changes including venous ulcerations and indiscriminately affects between 30–40 million Americans. Numerous factors including age, weight, prolonged sitting or standing, genetics or a history of DVT (blood clots) can increase the risk of developing this common and often underdiagnosed disorder. Treatment options have evolved to an array of minimally invasive procedures in an office setting.

ABOUT CENTER FOR VEIN RESTORATION

Center for Vein Restoration (CVR) is the largest physician-led practice treating vein disease in the country. Having performed its first procedure in 2007 under President and CEO Dr. Sanjiv Lakhanpal, Center for Vein Restoration has since become nationally recognized as the clinical leader in treating chronic venous insufficiency. With 90 centers and growing, CVR has over 600 employees and conducts over 200,000 patient interactions annually. To learn more about CVR and its mission, visit http://www.centerforvein.com or by phone at 1-800-FIX-LEGS.