Even with an extended spring break, Freed-Hardeman's annual musical extravaganza finds a way to hit a high note this year. 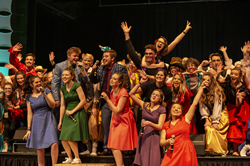 Makin' Music clubs celebrate "Sing Me Back Home" during a livestream performance held this spring.

There was a sense of closure to be able to finish what they had worked so hard on, for over a year. It wouldn’t be the full effect of a Saturday night Makin’ Music show, but they would still experience the feeling of being on the Loyd stage in front of an audience

For the first time in Makin’ Music history, the annual musical extravaganza did not take the stage this spring due to the extended spring break caused by the coronavirus pandemic.

The show’s producer Tony Allen was devastated at the thought of a canceled show. So he came up with the idea to live stream a run through performance to share with FHU students, alumni and friends before students left for the break.

The show’s leaders agreed to go for one chance to show what they had accomplished. They decided “to take what we had and throw it on stage.”

“At first, it looked as if Makin’ Music wouldn’t happen when we were expecting it to happen, and then all of a sudden, it wasn’t happening at all!” Peggy Weaver, director of the hosts and hostesses, said. “It was just bizarre how much changed in the course of 48 hours. My first thought was, ‘Our theme this year is ‘Sing Me Back Home,’ and I guess that is exactly what is going to happen.”

Student coordinator McKenna Shrader said everyone was grateful to perform the show, even if it wasn’t the way the group had hoped and planned. “There was a sense of closure to be able to finish what they had worked so hard on, for over a year. It wouldn’t be the full effect of a Saturday night Makin’ Music show, but they would still experience the feeling of being on the Loyd stage in front of an ‘audience,’” she said.

The performance was both debut and finale. So, on what would have been the night for tech check, they ran through the entire show, sans the professional sound and lighting normally accompanying the show.

It was, as the director and coordinator had warned, raw. Technical glitches marred the early part of the performance. “It was very weird for my performers to perform to a camera,” Weaver said, “but after the first couple of songs, the texts were rolling in to all of our phones letting us know that there were thousands of people watching and cheering us on from their homes!”

With nearly 12,000 unique viewers the online show generated the largest audience ever to watch a Makin’ Music production. “It will go down in history as one of the most watched Makin’ Music shows, so it is definitely very memorable for everyone that watched or participated in the show,” Shrader said.

In more than a bit of irony, the first line of the opening number says, “Tonight’s the night we’ll make history.” It goes on to ask, “Whatcha doing tonight? Have you heard that the world’s gone crazy?” The world had, in fact, gone crazy. And, Makin’ Music 43 did make a little history.

Social clubs celebrate the end of the Makin' Music 43 show.