Making Autonomous Vehicles More Secure, Many Attacks at a Time 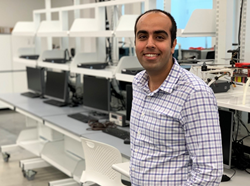 “If your bank account is hacked, that causes serious financial problems. But if your autonomous vehicle is hacked, we could be talking about life-threatening consequences.

As today's CPS evolve and become more complex, they also grow increasingly more vulnerable to attacks. Dr. Arman Sargolzaei, assistant professor of electrical engineering, has been awarded a grant from Cyber Florida to research this imminent threat by defining those weaknesses, and designing stronger systems against different types of threats.

One of the possible attacks is called Time Delay Switched (TDS) and consists of a hacker inserting a time delay into a networked control system. In the case of autonomous vehicles, Sargolzaei said this could affect the critical immediacy in which controllers receive information, impacting sensor function and potentially leading to accidents.

“These attacks represent major safety issues in the future,” said Sargolzaei. “If your bank account is hacked, that causes serious financial problems. But if your autonomous vehicle is hacked, we could be talking about life-threatening consequences.”

The idea of TDS attack was invented by Sargolzaei and his collaborators, and there is a patent on ways to detect and respond to it. Another possible attack being used to test the CPS is called False Data Injection. Part of the project creates a Random Attack Generator that would combine these two types of attacks, to generate many possibilities of intrusions to the system.

“Hackers might use these new kinds of attacks in the future and we don’t want to wait for that to happen to then figure out what to do,” said Sargolzaei. “We need to be creative on how we can get ahead of them.”
Sargolzaei said the research is also part of Florida Poly’s Advanced Mobility Institute’s (AMI) efforts to develop and test autonomous vehicle technology in the state.

“Cyber-attacks in general are a big problem, but the focus is usually on cybersecurity, more on the software side of things,” said Sargolzaei. “But when it’s about the security of cyber-physical systems, we’re talking directly about people’s safety.”

For the most recent university news, visit Florida Poly News.

ABOUT FLORIDA POLYTECHNIC UNIVERSITY:
Florida Polytechnic University is an accredited member of the State University System of Florida, dedicated exclusively to STEM (Science, Technology, Engineering and Mathematics). The University is a powerful economic engine within the state of Florida, blending applied research with industry partnerships to give students an academically rigorous education with real-world relevance. The campus is located in Lakeland, Florida along the I-4 High Tech Corridor. Connect with Florida Poly.