Making Chromosomes Count is launching the first of its kind and much anticipated, an all-encompassing magazine about Down syndrome, nationwide

An independent, forward-thinking and non-partisan publication that goes way beyond educating and raising awareness about Down syndrome. 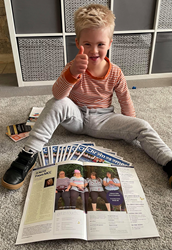 Ever since becoming a #LuckyFew mum over six years ago, I’ve had a vision for an all-encompassing platform about Down syndrome

Charity Making Chromosomes Count is extremely proud to launch the first issue of their much-anticipated magazine. An independent, forward-thinking and non-partisan publication that goes way beyond educating and raising awareness about Down syndrome. Living up to the charity’s mission statement, To showcase to the world the fascinating kaleidoscope that is Down syndrome and its community, it provides a genuine and non-judgmental hub of information from a wide spectrum of contributors: medical professionals, Down syndrome-related organisations and also from the community itself by featuring ground-breaking stories highlighting campaigns, achievements and challenges of individuals with the condition, be it in the educational, health or even arts and leisure spheres.

Its aim is to reach and update not only families-to-be, new families and seasoned families but also all bodies that intrinsically influence, one way or the other, the perceptions of the condition upon the population at large: health care professionals, educators, public sector workers and even Members of Parliament. Complimentary copies of the magazine will be distributed to select hospitals/NHS Trusts/support groups/ schools and will be available for purchase and subscription on the charity’s website: makingchromosomescount.co.uk.  "Ever since becoming a #LuckyFew mum over six years ago, I’ve had a vision for an all-encompassing platform about Down syndrome, where parents and relevant professionals could easily find whatever resources they were after, whatever the age group of their child, whatever the topic, and especially where their voice would be echoed," said Stacey Byrne.

A labour of love put together by an eclectic group of women from around the world, directly or indirectly impacted by Down syndrome, all on a volunteer basis and all passionate about bringing the community together and presenting it to the mainstream population warts and all.

Notes to editor: The charity came to life a year ago after Stacey Byrne, the driving force and mother of four, found sourcing and navigating through all the information about Down syndrome extremely time-consuming, daunting, and confusing. She dreamed up a platform where most information could be readily available at a press of a button. She teamed up with the creative force, American-based graphic designer, and a huge fan of people with Down syndrome, Sandy Nasonte, to create and found Making Chromosomes Count. Within just 11 months, their partnership started with a simple four-page newsletter, the concept of which immediately garnered the support of the community, evolved to become a successful and professionally run website, expanded with a popular presence on all social media platforms, and grew to become a 10-member strong international team who published the first issue of their glossy magazine and are currently working on the second. There is no stopping them!

Media, hard copy of the Magazine sent on request. Each magazine will cost £3.50 each plus postage. A yearly subscription (3 issues) will be £10 plus postage. For bulk orders or to qualify for complimentary copies please go to MCCGrabYours@gmail.com and request more information. You can purchase YOURS HERE. Making Chromosomes Count are non profit and rely solely on donations, to donate: paypal.me/MCCNews MCC website article: http://makingchromosomescount.co.uk/launching-first-of-its-kind-magazine-about-down-syndrome-nationwide/