In the ‘America Under Attack’ Episode, Journalists from Major TV and Radio Networks Describe the Personal and Professional Turmoil they Experienced as they Realized the Gravity of the Situation on September 11, 2001 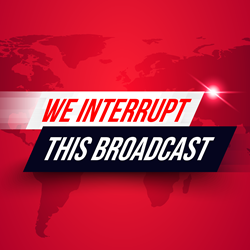 'We Interrupt This Broadcast: Before it was history, it was news'

‘…Everybody who went down to that scene…went knowing that their own life was in peril. …Everybody forgot about any type of danger they were in and they just became reporters…they told the story…that needed to be told.’ – John Montone, 1010WINS

The attacks of September 11, 2001, claimed 3,000 lives and left behind an estimated 25,000 injured. Two wars were launched in the name of the attacks of that day – in Iraq and Afghanistan (the latter of which is still in the news today).

Americans from all walks of life were scarred by what happened. And just as the death toll continues to mount for those exposed to the air around ground zero in New York -- the indelible memories from that day live on in the journalists who chronicled the single worst day in modern American history.

Those memories are shared in “9-11: America Under Attack,” the emotionally gripping episode from the new 12-episode podcast series, We Interrupt This Broadcast, hosted by legendary broadcaster Bill Kurtis and narrated by NBC’s Brian Williams.

Reporters and anchors from CNN, NBC, CBS, FOX, ABC, 1010WINS and WOR New York radio and more discuss their personal and intimate experience of reporting on 9/11:

The podcast, based on Joe Garner’s New York Times Bestselling book of the same name, celebrates the crucial role broadcast journalism has played throughout our nation’s history. Each episode unfolds with the brisk pace and tone of a thriller while presenting an in-depth look into the reporting of, and reaction to, events that have since become benchmarks in history. The contributors are a “Who’s who” in broadcast journalism.

The docuseries, produced by i4 Media Ventures, LLC, will be presented over six 12-episode seasons for a total of 72 episodes. Each season is comprised of 12 episodes, all published simultaneously: 10 episodes in each season are based on events that occurred in the broadcast era and two are based on seminal moments that occurred in early American history (such as the passing of the 19th Amendment) and dramatized as if reported by broadcast journalists. Each episode concludes with the journalists offering candid and critical analysis on how they and their fellow reporters covered the event.

“We Interrupt This Broadcast” is now available for download on Apple Podcasts, Stitcher, Spotify, Google Play and wherever listeners get their podcasts.

“We Interrupt This Broadcast” is being represented for ad and sponsorship sales by New York and Los Angeles-based Crossover Media Group Sales (http://www.crossovermediagroup.com).

About Joe Garner
Dubbed “the Ken Burns of the written and recorded word” by talk legend Larry King, Joe Garner is a veteran radio industry executive, narrator, host and producer, as well as a multiple New York Times bestselling author. His seminal multimedia book, We Interrupt This Broadcast, innovatively pairing audio, photographs and text, has sold more than one million copies and has for two decades served as a go-to chronicle of America’s broadcast history. The “We Interrupt This Broadcast” docuseries podcast is the maiden project of i4 Media Ventures, LLC, co-founded in December 2020 by Garner, Ron Hartenbaum and Scott Calka.

WITB Episode 10: America Under Attack6-minute edited clip from the episode about the attacks on 9/11