The Los Angeles area doctor comments on a recent article that an increased emphasis on male appearance has resulted in more interest from men in plastic surgery and cosmetic procedures worldwide. 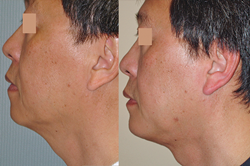 Liposuction of unwanted fat from the neck area can create a more appearance in male and female patients.

While pop groups like BTS might seem to set an almost impossibly high bar for Asian men in terms of youthfulness, American males have to deal not only with the likes of a Harry Styles but with actors in their mid-fifties like Brad Pitt and Leonardo DiCaprio who barely look 40.

A December 24 article on Allure reports on the rapidly growing craze for plastic surgery and other cosmetic procedures in South Korean men. The article notes that modern men in the highly dynamic and trendsetting Asian nation are increasingly just as concerned about their body image and self-confidence as women. Media saturation by ultra-young appearing K-pop performers and film stars is only further boosting the trend. Board-certified plastic surgeon Dr. Michael Jazayeri says that a rise in procedures for men is happening to one degree or another in just about every developed nation and that is very definitely true right here in the United States and at his offices in Orange County, California. He adds that, while pop groups like BTS might seem to set an almost impossibly high bar for Asian men in terms of youthfulness, American males have to deal not only with the likes of a Harry Styles but with actors in their mid-fifties like Brad Pitt and Leonardo DiCaprio who barely look 40.

Dr. Michael Jazayeri says that he has been seeing more male patients for a number of years but the proportion compared to women continues to increase. He adds that the types of procedures patients are looking into include rhinoplasty (nose jobs) and tummy tucks as well as breast reductions for men who may be dealing with gynecomastia, a condition that causes oversized male breasts. He adds that cosmetic procedures for facial rejuvenation such as injectable fillers and “bro-tox” are also popular choices for male patients. He adds that, as the stigma associated with plastic surgery continues its long decline, men of all ages are opening up to the idea of getting some type of work done. Dr. Jazayeri notes that, overall, he has found that patients have been pleased with the outcomes of the work done and, just like women, whether or not they want to share that they’ve done anything or credit the improvement to something else is entirely up to them.

Dr. Jazayeri notes says that, just like women, men want to remain young and vigorous in appearance and increasingly know that plastic surgery and cosmetic procedures can help to make it possible. He adds that, especially in appearance-conscious Southern California, men, as well as women, are often concerned about the career impacts of appearing older and may get procedures largely to maintain their relevance in the workforce. Regardless, says Dr. Jazayeri, no one of any gender should feel ashamed for wanting to look their best.

For more information on Dr. Michael Jazayeri, visit his website at http://www.drjaz.com/ or by calling his office at (714) 242-5908 to discuss scheduling a consultation today.