Many Misconceptions Exist Between Followers of Islam and Christianity: Let’s Talk 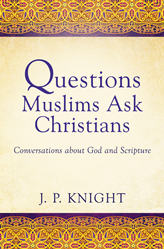 This is a book written for Muslims about Christian beliefs that is informed, clear, good-natured and engaging.

Knight has embarked on a unique undertaking by asking the ummah in four separate mosques: “If you could sit down with a devoted Christian and ask any question about their beliefs or practices, what would you ask?” This book addresses the 132 questions he received in response. Questions are answered clearly in a Q & A format with the hopes that Christian and Muslim readers will be able to better understand one another.

“This is a book written for Muslims about Christian beliefs that is informed, clear, good-natured and engaging. It tackles the most common questions that Muslims, if given the chance, would like to ask practicing Christians,” said Knight.

After pastoring Christian churches for twenty years, America’s changing religious landscape forced J.P. Knight to face his ignorance of the wider religious teachings. He resigned his congregation to enter post-graduate studies with an emphasis in world religions. Upon completion, he taught courses in many world areas and became pastor of an international church. Today, Knight is President of 4Ethne, a non-profit dedicated to helping Christian communities build bridges to their “next-door nations.” He and his wife have resided in Michigan for the past twenty years, the last six in an Arab neighborhood, giving them an opportunity to befriend scores of Muslim people. More information at: jpknightauthor.com.

Xulon Press, a division of Salem Media Group, is the world’s largest Christian self-publisher, with more than 15,000 titles published to date. Questions Muslims Ask Christians: Conversations about God and Scripture is available online through xulonpress.com/bookstore, amazon.com, and barnesandnoble.com.