MaoShi Dance Bot, the Ambitious Project That is Aiming to Raise 10 Million Dollars on Indiegogo

MaoShi Dance Bot! The movie based on a true story. Live, dream, laugh and dance. Make it happen! 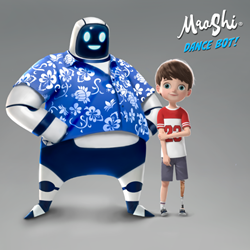 The limits that we see only exist in our minds.

MaoShi Dance Bot is the project of a team of youngsters who decided to share their idea on the crowdfunding platform Indiegogo, in order to produce a movie under the same name.

Based on real-life events, the film tells the story of a 10-year-old child that lives in New York and dreams of becoming a mechatronic engineer and a dancer, whose life took a 180 degree turn after suffering a severe accident. To cope with sadness, he ensembles a robot that dances and is capable to show and understand feelings, just like humans. From that point forward, the adventure begins.

MaoShi, the movie creator and CEO of Galiano Company Studios, intends to give hope to children and people with disabilities, encouraging them to find a reason to keep going despite the circumstances.

To produce the movie, the team has set a 10 million dollar goal. The idea is to bring the movie to the big screen, worldwide.

We asked creator MaoShi where he got the inspiration for the film, and he said: “The kid is actually me. I had an accident that completely changed my life and taught me to never give up. I re-learned how to walk and understood that if I survived, I just had to share my story.”

Contributions to the funding can be made starting on August 9, 2019 at Indiegogo.

To support the project, you just need to search “MaoShi Dance Bot” on the website and make your contribution. Likewise, all the information related to the process and updates on the film will be available on Facebook, Instagram and YouTube.