The Marine Technology Society (MTS), the premier forum for the exchange of information and ideas in marine science and technology for academia, government, and industry, welcomes Dr. Richard W. (Rick) Spinrad as its new President this January. Dr. Spinrad succeeds Donna Kocak of Harris Corporation, who served as President from 2017-2018. Captain Zdenka Willis (USN, Ret) was also announced as the President-Elect. 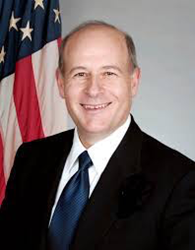 The Marine Technology Society (MTS), the premier forum for the exchange of information and ideas in marine science and technology for academia, government, and industry, welcomes Dr. Richard W. (Rick) Spinrad as its new President this January. Dr. Spinrad succeeds Donna Kocak of Harris Corporation, who served as President from 2017-2018. Captain Zdenka Willis (USN, Ret) was also announced as the President-Elect.

An internationally recognized scientist and executive with more than 30 years of experience, Dr. Spinrad has served as the Chief Scientist for NOAA under the Obama administration, and previously as the Vice President for research at Oregon State University (OSU) in Corvallis, Oregon, and from 2005 until 2010, as the head of NOAA’s Office of Oceanic and Atmospheric Research and the head of the National Ocean Service.

Dr. Spinrad has extensive experience in environmental research, management, and teaching. He was a leader in the development of the nation’s first-ever ocean research priorities and established the U.S. Navy’s environmental research strategy. He has directed federal research programs and served on the faculty of three major universities. He has been published in pre-eminent peer-reviewed journals and awarded highest honors from three international professional societies.

Dr. Spinrad began his career as a research scientist at the Bigelow Laboratory for Ocean Sciences in Maine, where he worked on underwater optics and radiative transfer. From there, he went on to serve as President of Sea Tech, Inc. in Corvallis, Oregon (1986-1987) and then joined the Office of Naval Research (ONR) as a program manager (1987-1988).

Dr. Spinrad also has experience in the non-profit sector having served as executive director for research and education at the Consortium for Oceanographic Research and Education, Inc. (CORE) in Washington, D.C. (1994-1999, with then-President ADM James D. Watkins). While at CORE, Dr. Spinrad supervised research studies of midshipmen as an adjunct associate professor at the United States Naval Academy in Annapolis, Md. (1996-1999).

As technical director for the Oceanographer of the United States Navy (1999-2003), Dr. Spinrad served as the senior civilian advisor to the U.S. Navy on operational oceanographic and meteorological research and operations. He also established the priorities for the U.S. Navy investment in application of oceanographic products to fleet operations.

During his first tenure at NOAA, Dr. Spinrad served as the head of NOAA’s National Ocean Service (2003-2005) and Office of Oceanic and Atmospheric Research (2005-2010). During this time, he successfully negotiated the United States’ position in establishing a global tsunami warning system, co-led the development of the White House Ocean Research Priorities Plan, and established agency-wide policies for scientific integrity and independence, among other accomplishments.

While serving as vice president for research at OSU, Dr. Spinrad oversaw a nearly $300-million-sponsored research program in the full spectrum of life, natural, physical, and social sciences for 12 colleges and 18 center and institutes. He developed the infrastructure for engaging industry, which resulted in a 42-percent increase in commercially-sponsored research over two years.

Dr. Spinrad received his B.A. in earth and planetary sciences from The Johns Hopkins University in Baltimore, Maryland. He received his M.S. and Ph.D. both in oceanography from Oregon State University. He holds a Chartered Marine Scientist certificate from the Institute of Marine Engineering Science and Technology in London, England.

He is affiliated with the American Association for the Advancement of Science, the American Meteorological Society, the American Geophysical Union, The Institute of Electrical and Electronic Engineers, The Oceanography Society, the Marine Technology Society, and others. His research has been published in numerous peer-reviewed journals.

**
The Marine Technology Society was incorporated in June 1963 to give members of academia, government and industry a common forum for the exchange of information and ideas. Our mission is to: facilitate a broader understanding of the relevance of marine technology to wider global issues by enhancing the dissemination of marine technology information; promote and improve marine technology and related educational programs; advance the development of the tools and procedures required to explore, study and further the responsible and sustainable use of the oceans. To learn more, visit http://www.mtsociety.org.

Press inquiries please contact MTS at (202) 827-7170 or by email at Kathleen.Herndon@mtsociety.org.