New Book Asserts That Readers Have Been Reading ‘The Deceiving Scriptures’

Author Mario Jaramillo reveals true content of the bible from Genesis to the Gospels. 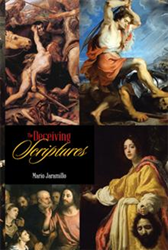 Author Mario Jaramillo believed, “Christians have lived for thousands of years believing what they are told and have never questioned it. It is time for them to read the book in order to open their eyes to see the ‘real light’, after they find out that the light was also made for them and that the light is good.” In his quest to open the eyes of as many Christians he can reach, Jaramillo pens a very intricate revelation of what he calls the ‘true content’ of “The Deceiving Scriptures.”

This book provides an unbiased description of the content of the bible, seen through the eyes of science. In here, the author exposes not only the infantile attempts by those that supposedly wrote the books of the bible to explain the origin of all things, but also its immensely violent content, including genocides of entire cities where hundreds of thousands of innocent women and children were killed. Those massacres were carried out by armies commanded by the patriarchs, real serial killers that are systematically portrayed as models of civility, kindness, and compassion during Sunday mass to millions of people by the priests of the Catholic Church. Thus Jaramillo posts the question, “How can such a blood bath that is the bible be considered a book of divine origin?”

After years or reading and re-reading the scriptures, Jaramillo claims that he has seen through what must be the most violent book ever written. Dedicated to share his insights and to shed light on the true nature of what Christians believe as the Holy Word, Jaramillo urges readers to take the next step, to open their bibles in order for them to decipher “The Deceiving Scriptures.”

About the Author
Mario Jaramillo was born in Colombia amid immense mountains. Since his childhood, he felt the emotions inspired by the mysteries of nature, the enigmas of the people who surronded him, and the fascination of learning from many sources. Later in his adult years, Jaramillo became a medical doctor who dedicated his life to defend the rights of women to decide freely the number of children they want to have and when to have them. This passion for defending women rights and contraception generated a violent attack against him, to the point of an assaination. The assaination attempt failed but a tirelss persucution towards him continued, which later on developed into false accusations of him practicing abortions, giving him his ticket to prison. After his sentence, Dr. Jaramillo worked for over 15 years in the US as a public health professional, serving family plannings programs around the globe; and he later on retired in the 1990s after having contibuted to delivery of tens of thousands babies into this world, and helping build family planning programs that saved hundreds of thousands of women from death as a result of complicated pregnancies. Dr. Jaramillo died in 2013.