“Yet There Is Room: A Story of Redemption” from Christian Faith Publishing author Marion Roybal is a moving narrative about Dr. Paul Boresman, an abortionist who passed away in a car crash, and Carlee, one of the many unborn who died at his hands, as they meet and start a discourse someplace in the afterlife between heaven and earth. 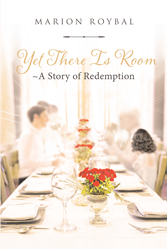 Roybal shares, “Paul Borseman, MD, OB-GYN, abortion specialist, dead and on hold, he thought, his personal significance and all that had mattered a few seconds ago were lost in a blinding light nothingness. He didn’t see the speeding truck coming at him in the wrong lane or feel himself being tossed, along with his red Miata, into a cement retaining wall. They clung there, the car a mass of red wreckage and the man inside clearly broken and bleeding. He was just gone; gone to where he had no idea. Now what? His sense of stability and substance were becoming fluid. Oddly, he had a presence of mind and that, barely. Suddenly to his relief, a waif began to take shape. A young girl floated, or so it seemed, toward him. She claimed to have been one of his patients, one of whom the procedures he performed proved to be 100 percent fatal. And so begins his journey from life to death to new life, but not without immeasurable struggles and conversations with the girl, Carlee. He believed they were in a useless debate; she insisted that her reason for their interchange was about discovery for her, an understanding of human thoughts and actions. Once Carlee fades from him, the real and painful leg of his journey begins.

“Since Roe v. Wade was passed in 1973, nearly sixty million abortions have been performed in the United States. Pro-choice and pro-life were born and have been battling for preeminence ever since. We are not privy to what happens to those millions of pre-born souls, but we can speculate. What we are privy to is that God is good and does all things well.”

Published by Christian Faith Publishing, Marion Roybal’s new book is a captivating tale that revolves around robbing one’s liberty by sacrificing their lives before they are even born.

This narrative hopes to open the reader’s mind into the issue of abortion and to enlighten them with the dark reality of how ending the lives of innocent and vulnerable beings is against what God designed His people to be.

View a synopsis of “Yet There Is Room: A Story of Redemption” on YouTube.

Consumers can purchase “Yet There Is Room: A Story of Redemption” at traditional brick & mortar bookstores, or online at Amazon.com, Apple iTunes store, or Barnes and Noble.

For additional information or inquiries about “Yet There Is Room: A Story of Redemption,” contact the Christian Faith Publishing media department at 866-554-0919.