UN climate czar Mark Carney was grilled by Canadian MP Pierre Poilievre regarding his climate policy lobbying; his NetZero plans are challenged by Friends of Science reports. Ben Stein on “The World According to Ben Stein” looked at how “They Blinded us with Science” on climate totalitarianism with Michelle Stirling of Friends of Science. 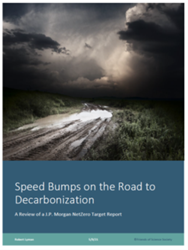 Speed Bumps on the Road to Decarbonization - Part 1

As reported on May 28, 2021 by the Financial Post, UN Special Envoy on Climate Action and Finance, Mark Carney, was grilled by Canadian MP Pierre Poilievre about possible conflicts of interest during his testimony to the House of Commons Committee on Industry, Science, and Technology, intended to explore the 'green economy', says Friends of Science.

Carney's push for "NetZero" and decarbonization is challenged on climate science and technical grounds by Friends of Science Society. Robert Lyman’s report “Speed Bumps on the Road to Decarbonization – Part 1” shows that most of the claimed methods of reaching Net Zero are technically or physically impossible. Lyman’s report is a plain language summary of the JP Morgan 2021 Annual Energy paper. Friends of Science published the report and also did a plain language walk through live stream, hosted by Michelle Stirling, Communications Manager for Friends of Science Society.

Lyman had also testified to the House of Commons committee that a rapid energy transition to a ‘green economy’ would cost trillions of dollars and would result in massive job losses and societal upheaval for no climate or environmental benefit.

The House of Commons committee challenges to Carney by Poilievre concerned the fact that Carney has been meeting with many levels of government officials on climate and related green economy issues, and he potentially stands to benefit financially because Carney is also the Vice Chair and Head of ESG and Impact Fund Investing for Brookfield Asset Management since August 26, 2020. Poilievre suggested this is a conflict of interest and therefore Carney should be registered as a lobbyist. Carney hotly disputed that he is lobbyist.

In a related podcast about climate totalitarianism, American icon Ben Stein invited Michelle Stirling of Friends of Science to be part of his panel “The World According to Ben Stein” on June 3, 2021, with the topic of “They Blinded us with Science” EP92. Ben and Michelle reiterated that much of the climate agenda is ultimately a totalitarian death cult, and much of it has its roots in the eugenics and corporate statism of Nazi Germany, where politicized science led to the Holocaust. The late Michael Crichton has addressed the dangers of politicized science in an excerpt of his book “State of Fear”, showing how eugenics was similarly accepted as a political agenda without any scientific justification for almost 40 years.

Stirling also noted that Deutsche Bank has proposed the need for an eco-dictatorship in its Nov. 2020 “konzept – What we Must do to Rebuild” plan.

Ben Stein pointed out that the decarbonization climate agenda simply delivers the upper hand to competitor nations like China, a fact supported by Stirling, citing a Robert Lyman report “When Giants Arise”, on the demographic power of emerging nations.

When Giants Arise: The Real World of GHG Emissions and GrowthRobert Lyman's report shows that emerging nations' demographic power will far outstrip that of the West - and these nations are unlikely to cower to climate change demands.