Recent release “Stage Flight” from Page Publishing author Mark David is a gripping drama exploring all possible motives after a young star vanishes without a trace from the public eye after a brutal attack that left her mother dead and her fans nursing the fantasy that she was still alive. 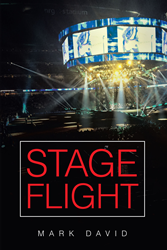 Mark David, a Houston-based author and father of two grown daughters who has been inducted into the Jefferson High School Baseball Hall of Fame in Lafayette, Indiana, has completed his book “Stage Flight”: an engrossing mystery with an intricate plot that keeps the reader guessing until the final chapter.
Lory Kikks, age fifteen, is a music prodigy, scoring seven chart-topping hits and two Grammy Awards in her short two-year career. Her record company wants to push her to headline her first show in front of fifty-two thousand screaming fans, a sellout crowd at the Houston Rodeo.
Disaster strikes, and Lory disappears from her skyrocketing career, leaving fans to wonder if she’s alive or dead.
Ten years later, Cain Wilson, a disc jockey at a small-market radio station, notices similarities in a singer to Lory’s style and content.
Cain is not convinced she’s still alive, or of the conspiracy theories about her, but he’s sure as hell going to find out if Elvis was still in the building.
The search is on!
Published by New York City-based Page Publishing, Mark David’s book is an enthralling whodunit with a cast of unforgettable characters and head-spinning plot twists that keep the pages turning until the thrilling conclusion.

Readers who wish to experience this spellbinding work can purchase “Stage Flight” at bookstores everywhere, or online at the Apple iTunes store, Amazon, Google Play, or Barnes and Noble.