Mark Gagnon’s new book “Spartans Rise” is an action-packed novel of a young man and his family during a war with extraterrestrial invaders.

Recent release “Spartans Rise” from Page Publishing author Mark Gagnon is a thrilling novel of a young man and his family who become the catalysts for mankind’s victory against alien conquerors. 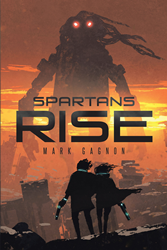 Mark Gagnon, a former car dealer, courier, Home Depot department manager, and a loving husband and father from Rhode Island, has completed his new book, “Spartans Rise”: a riveting narrative of Marcus, his father, and his brother and their pivotal roles in humanity’s salvation from alien invaders.

Author Gagnon shares to readers an idea of humanity being a species of great resilience which evolves in times of overwhelming tribulation: “The human race was about to make a quantum leap forward in technology and bioengineering when they were attacked and almost completely wiped out. Now after four hundred years, all that is left are a few large fortified cities on Earth and an elite military organization led by Hannibal that keep the marauding aliens at bay. Now with an ally, the humans are beginning to win back their world.

Marcus; Leo, his brother; and Patrick, their father, are escorting a caravan between cities when it is attacked. They help defeat the aliens, and they become key players in advancing toward the human race’s former heights. Marcus, in particular, opens doors that no one even knew existed.”

Published by Page Publishing, Mark Gagnon’s rip-roaring tale is filled with breathtaking science fiction exploits that prove hope is not lost if one truly believes to the fullest potential.

Readers who wish to experience this work can purchase“Spartans Rise” at bookstores everywhere or online at the Apple iTunes store, Amazon, Google Play, or Barnes and Noble.