Southern Illinois University Edwardsville’s Mark Luer, PharmD, FCCP, has been named Dean of the School of Pharmacy (SOP). Luer has served as interim dean since July 2018. The appointment is subject to SIU Board of Trustees approval. 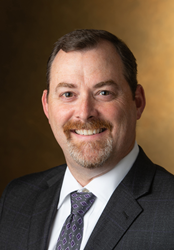 "Through successes in student performance, patient care, community engagement and research, SIUE’s pharmacy program has earned a reputation for excellence. I am happy to have been a part of its development."

Southern Illinois University Edwardsville’s Mark Luer, PharmD, FCCP, has been named dean of the School of Pharmacy (SOP). Luer has served as interim dean since July 2018. The appointment is subject to SIU Board of Trustees approval.

“The SIUE School of Pharmacy has continued its outstanding record of accomplishment during Dr. Luer’s service as interim dean, and we are excited to see what will be achieved in the future,” said SIUE Chancellor Randy Pembrook, PhD. “His passion for students, his recognition for what is happening nationally in the field, and his knowledge of our program and our people, ensure a bright future for the School.”

“The SIUE School of Pharmacy has an excellent reputation, and Dr. Luer has been a longtime contributor to the School’s success,” said Provost and Vice Chancellor for Academic Affairs Denise Cobb, PhD. “Dr. Luer is a student-centered leader, who will support and strengthen both the Doctor of Pharmacy and pharmaceutical sciences degree programs. He is strongly committed to growing areas of innovation, and in particular those where faculty and student research opportunities exist. Dr. Luer’s value for research, and his proven success as a scholar and administrator create a dynamic setting where these programs should prosper.”

“I am deeply appreciative of the thoughtful work of the search committee, co-chaired by Dr. Chris Herndon and Dr. Guim Kwon,” Cobb added. “Dr. Luer is a valued campus leader, who is respected in his discipline. I look forward to working with him and the School to support their vision for the future.”

“I am grateful for the opportunity, and appreciate the confidence that Chancellor Pembrook, Provost Cobb and my colleagues across the University have shown by selecting me as dean of the SIUE School of Pharmacy,” Luer said. “Through successes in student performance, patient care, community engagement and research, SIUE’s pharmacy program has earned a reputation for excellence. I am happy to have been a part of its development.”

“In my new role, I look forward to further advancing our mission as we work to address the unmet healthcare needs of an increasingly complex and changing world. I believe that our students, faculty and staff are strategically positioned to be leaders as we often forge new paths to confront challenges,” Luer explained. “One example is the new Master of Science in Healthcare Informatics (MHI) which is being offered concurrently with the Doctor of Pharmacy degree. This combined program, which brings together faculty from the SIUE Schools of Business; Education, Health and Human Behavior; Engineering; Nursing; and Pharmacy, was created because of the changing healthcare landscape where information technology is increasingly being used by pharmacists to improve patient healthcare options.”

Luer is highly regarded as a collaborative and inclusive leader who is strongly committed to the SOP’s advancement. Under Luer’s leadership, the SOP has continued to produce pharmacy candidates that are among the nation’s best in board pass rates and assessments, ranking number one among the eight programs in Illinois and Missouri for first attempt North American Pharmacist Licensure Examination® (NAPLEX) board pass rates.

Among the School’s other major accomplishments have been advancements in the areas of diversity and inclusion. “In fall 2018, we admitted the most diverse class of students in our program’s history,” Luer noted. “This occurred through an increase in awareness for cultural differences and a conscious effort to share our values with prospective students, one of which is inclusivity.”

Luer is a professor of pharmacy practice, and previously served as chair of the Department of Pharmacy Practice and director of clinical programs. He completed the Academic Leadership Fellows Program in 2005-06 at the American Association of Colleges of Pharmacy, was inducted as a fellow of the American College of Clinical Pharmacy in 2004, and is a current member of the Leadership Council of the American Cancer Society in Madison County.

Luer’s clinical interests include neurology, neurocritical care and pharmacokinetics. He has been an investigator on related grants totaling more than a half million dollars in extramural support and has published more than 70 manuscripts, book chapters and abstracts.

He earned his bachelor’s and doctor of pharmacy from the St. Louis College of Pharmacy. Additionally, he completed a clinical pharmacy residency, a critical care specialty residency and neuroscience fellowship at the University of Kentucky Medical Center.

Today’s pharmacists improve patients’ lives through the medication and education they provide. Dedicated to developing a community of caring pharmacists, the SIUE School of Pharmacy curriculum is nationally recognized as a model that offers students a unique combination of classroom education, research, community service and patient care. The School of Pharmacy’s areas of excellence include a drug design and discovery core; pediatric practice; chronic pain research and practice; and diabetes research and practice. As the only downstate Illinois pharmacy doctorate program, the SIUE School of Pharmacy is addressing the growing need for highly trained pharmacists in a rapidly growing field.