Mark Luttenberger’s new book “Philip II of Macedon” is a scholarly read on the life and legacy of Phillip II, king of Macedon.

Recent release “Philip II of Macedon” from Page Publishing author Mark Luttenberger is an astute narrative that delves into the history of Phillip Ii of Macedonia from his childhood to his impactful reign. 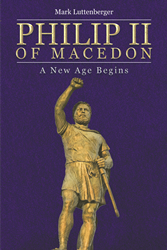 Mark Luttenberger, a retired quality assurance and lean manufacturing specialist, has completed his new book “Philip II of Macedon”: an erudite opus on the personal and tactical life of Phillip II of Macedonia that paved a way for glory to reign in his kingdom.

Author Luttenberger revisits the moments of ingenuity that brought Macedonia to a spotlight as one of the greatest powers of the ancient world: “The topic of inquiry is a political, military, and economic history of ancient Macedon during the reign of Philip II (359–336) in the fourth century BC. The first two chapters analyze the early history of Macedon and the development of the political, military, social, and economic institutions of the Macedonian kingdom. The balance of the book discusses the rise of Macedon from a small kingdom on the periphery of the Greek world to become the master of ancient Hellas and the Balkan world south of the Danube River.

The central figure of the book is Philip II who ascended the throne as a young man in his early twenties after the defeat and death of his brother and six thousand Macedonians by the hostile Illyrians. The book follows his twenty-three-year reign as he guides the Macedonian people to the pinnacle of power and dominance over their neighbors in the Balkan world. You will witness the political, military, and economic growth of the kingdom that Philip created through his numerous reforms and conquests. His energetic, cunning, and inspired leadership will be revealed in these accomplishments. At Philip’s death in 336, the foundation of power was established that his son Alexander the Great would use to conquer the Persian Empire.

As Philip’s power grew, you will encounter his seven wives that formed the basis of his diplomatic arrangements to protect the kingdom. You will be introduced to the leading characters whether family, friend, or foe. These include his wife and son Olympias and Alexander; friends Antipater and Parmenio; and foes Bardylis, Onomarchus, Demosthenes, and Artaxerxes III.

The book concludes with an analysis of the assassination of Philip and Alexander’s consolidation of power in the Balkan world in 335 BC before he embarks on his legendary journey.”

Published by Page Publishing, Mark Luttenberger’s knowledgeable book follows a royalty’s journey to achieving purpose and majesty that influenced the modern world with his philosophy and stratagems.

Readers who wish to experience this engrossing work can purchase “Philip II of Macedon” at bookstores everywhere or online at the Apple iTunes store, Amazon, Google Play, or Barnes and Noble.

About Page Publishing:
Page Publishing is a traditional New York–based full-service publishing house that handles all of the intricacies involved in publishing its authors’ books, including distribution in the world’s largest retail outlets and royalty generation. Page Publishing knows that authors need to be free to create, not bogged down with complicated business issues like eBook conversion, establishing wholesale accounts, insurance, shipping, taxes, and the like. Its roster of authors can leave behind these tedious, complex, and time-consuming issues, and focus on their passion: writing and creating. Learn more at http://www.pagepublishing.com.