The night was filled with celebrities, notable friends, music, laughter and a touching moment when Fat Joe stopped the music to offer an emotional tribute to his brother and sister, JR and Loren Ridinger. 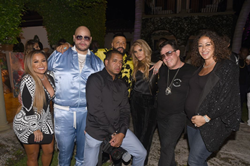 I grew up in the South Bronx, and it was either be a predator or be prey, and they taught me how to love, and I love them with my last breath.

“I want to salute my sister and my brother for hosting us tonight,” he said. “And [they are] my sister and my brother, from the bottom of my heart. I’d like to thank them for showing me how to love. I grew up in the South Bronx, and it was either be a predator or be prey, and they taught me how to love, and I love them with my last breath.” He then performed his two-time platinum, award-winning hit “All the Way Up,” saying that the song “never would have happened if it wasn’t for the Ridingers.”

Family Ties marks a momentous occasion in the career of a hip-hop legend. Not only is it Fat Joe’s 11th studio album, it is also his last studio album. Earlier this year, Fat Joe announced that he was taking a step back from producing his own albums to spend more time with family — to strengthen those ties that so clearly inspired this new album.

A “tremendous celebration” and a “night to remember” — as described by Loren Ridinger herself — there was nothing but love, support and excitement for the latest masterpiece from the Bronx-born mogul and artist. Fat Joe and the Ridingers were joined by a “who’s who” of celebrity friends, including DJ Khaled, Swizz Beats, Teyana Taylor, Winnie Harlow, Dre, Golden Barbie, Jeezy, Bryson Tiller, Dapper Dan, Fabolous, Emily B, Draya, Larsa Pippen, Nore, Too Short, Tony Montana, Daymond John, Cara Santana, Jessie Metcalf, RadMila, Alec Monopoly, Jessica Goicoechea, Steph Shep, Victoria Barbara, Amayra La Negra, Black Jaquar and many others. As the event occurred during Art Basel, Miami Beach’s world-famous art show, gorgeous pieces by artists Domingo Zapata and Felix Zemper were on display throughout the night.

Fat Joe co-produced Family Ties with Dre, following Joe’s highly anticipated follow-up to Plata O Plomo, his 2017 collaborative album with Remy Ma. Family Ties is available everywhere now. Though he is retiring from music production, Fat Joe remains an active member of the Market America | SHOP.COM family as the company’s President of Urban and Latino Development, a position and company dear to his heart. “Everyone says America is divided,” Fat Joe recently stated. “Come to [Market America | SHOP.COM] and see how this is a family.”

About Market America | SHOP.COM
Market America is a global product brokerage and internet marketing company that specializes in one-to-one marketing and is the creator of The Shopping Annuity. Its mission is to provide a robust business system for entrepreneurs, while providing consumers a better way to shop. Headquartered in Greensboro, NC and with locations in eight countries, including the US, Market America was founded in 1992 by Chairman and CEO JR Ridinger and has generated over $9 billion in accumulated sales. Through the company’s primary shopping website, SHOP.COM, consumers have access to approximately 300 million products, including Market America exclusive brands and thousands of top retail brands. SHOP.COM ranks 11th in Newsweek Magazine’s 2020 Best Online Shops. SHOP.COM ranks #36 on Internet Retailer’s World’s Largest Online Marketplaces, #12 in the 2019 Internet Retailer Primary Merchandise Category, #65 in the 2018 Internet Retailer Top 500, #96 in the Internet Retailer Asia 500 and #18 in 2017’s Internet Retailer Mobile 500. The company is also a two-time winner of the Better Business Bureau’s Torch Award for Marketplace Ethics and received 2019’s Triad Business Journal’s “Fast 50” award as one of the top privately-held companies for sustained growth, driving the area’s economy. By combining Market America's entrepreneurial business model with SHOP.COM's powerful comparative shopping engine, Cashback Program, Hot Deals, SHOPBuddy® Express Pay check out, social shopping integration and countless other features, the company has become the ultimate online shopping destination.
For more information: Marketamerica.com