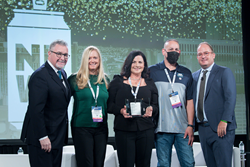 “We chose Laura for this award because her company exemplifies what every beer and beverage distributor in the U.S. could be doing to help stop human trafficking,” said Craig Purser, President and CEO of NBWA.

Markstein Sales Company, the largest woman-owned and operated wholesale beverage distributor in Northern California, announced today that its President, Laura Markstein, has been awarded the esteemed Public Affairs Award by the National Beer Wholesalers Association (NBWA) for her company’s work helping to end human trafficking in the United States. This award, given to one individual per year, if given at all, was announced at the NBWA 84th Annual Convention earlier this month. As a long-time supporter and sponsor of the local New Day for Children organization that provides funding to help American children who have been recovered from sex trafficking, Markstein took her efforts to a national level during 2021 when her company joined the NBWA’s Distributors Against Human Trafficking Initiative.

As part of its efforts, Markstein installed signage on all of its 75 vehicles that are typically on the roads of Contra Costa and Alameda Counties 14 hours per day, six days per week. The goal of these signs was to raise awareness locally and to provide easy access to hotline information for people that suspect, or know of, human trafficking cases. Markstein also provided personalized training, leveraged from both NBWA and New Day for Children, for all truck drivers and merchandisers so they know what to look out for on their daily routes and in the businesses they serve. Complementing these efforts, Markstein also regularly appealed to other companies around the country to join in the fight to end human trafficking.

“Once we learned that our beer and beverage drivers had a unique visibility to many of the prime locations where traffickers often exploit victims, we wanted to leverage our position and do all we could to help fight this tragedy,” said Laura Markstein, CEO of Markstein Sales Company. “While we are proud of the work we have done to help this cause, this is a growing problem in our country and it needs every company and American citizen to do their part to help – whether that be company sponsored programs or simply a watchful eye in someone’s everyday life. These efforts make a tangible difference and we can all do our part to help.”

“We chose Laura for this award because her company exemplifies what every beer and beverage distributor in the U.S. could be doing to help stop human trafficking,” said Craig Purser, President and CEO of NBWA. “If every member in every state across the country also contributes their part to help spot human trafficking while on their daily routes, we can make significant progress towards ending this criminal activity.”

The NBWA Initiative
In 2020, the National Beer Wholesalers Association launched Distributors Against Human Trafficking, to help combat human trafficking in the United States. Working alongside state attorneys general, NBWA created an awareness training video to help more than 140,000 beer distribution employees in the U.S. recognize and report signs of human trafficking. To date, NBWA has successfully trained nearly 24,000 beer distributors from 207 companies, surpassing its initial goal to train 10,000 distributors by the end of 2021. Beer distributors are uniquely positioned to help fight this heinous crime given their level of access to locations often unseen by the public as they visit around 600,000 licensed retail locations across the country.

About
Markstein Sales Company is a fourth-generation, woman-owned and operated wholesale beverage distributor based in Antioch, Calif. Founded in 1919 with just a horse, a wagon and six cases of beer, Markstein is now in its 102nd year and distributing over four million cases annually to 2000 retailers in the Bay Area. The company’s portfolio is composed of multiple world-class beers including the Anheuser-Busch InBev and Constellation Brands family of beers, several high-quality craft beers and many others, as well as non-alcoholic beverages. Markstein is known for outstanding customer service, dedication to their employees and commitment to the community. The company continues to rank as best in class by retailers and is one of the top ten largest Woman Owned Businesses in the Bay Area. More information can be found at https://www.marksteinsalescompany.com.