Mary: A Story About Commitment to the Truth and Mankind’s Rejection of It 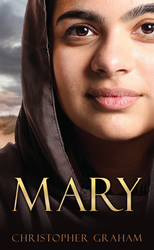 His mother was an important part of the story.

Christopher Graham’s book, Mary ($16.99, paperback, 9781662813535; $8.99, ebook, 9781662813542) is available for purchase.
Christopher Graham’s book is centered on Mary, the mother of Jesus, and takes place after the death of her son. It is a practical story of how this mother deals with the death of her son and is supported by a group of loyal friends.
From the foot of the cross, to the morning of the resurrection, Mary, the mother of Jesus, travels from Golgotha to the Upper room to hide from the Jewish Temple Guards. Here the story of how Jesus was conceived is revealed. The details grow as more people enter the room and as the story unfolds, the trial of Jesus is not just about His actions. It is a story about a woman’s acceptance of her role as God’s chosen vessel to bring His Son into the world and her commitment to the truth as the world rejects it.

Graham believes that Mary’s life is significant to study when learning the stories of Jesus’ life. “His mother was an important part of the story,” said Graham.

Christopher Graham is a member St. Francis Xavier, Roman Catholic Church and a retired IT executive. He lives in Merrill, Wisconsin and is originally from Cleveland, Ohio. He is married to Kathleen Lee Graham (Przybysz) and has two children, Christopher, and Alicia. He is a graduate of Cleveland State University and holds a Master’s Degree from University of Wisconsin – Oshkosh. He believes Proverbs 16:3, “Commit your works to the Lord, and your plans will be established.”

Xulon Press, a division of Salem Media Group, is the world’s largest Christian self-publisher, with more than 12,000 titles published to date. Mary is available online through xulonpress.com/bookstore, amazon.com, and barnesandnoble.com.